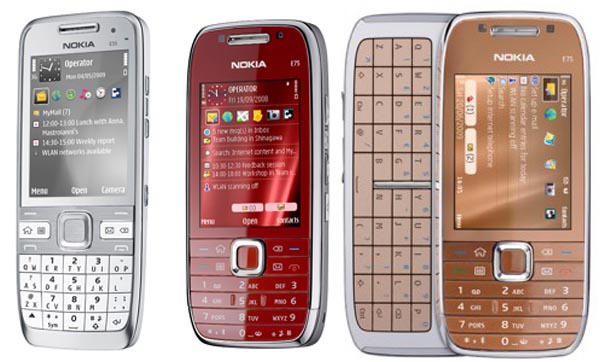 Nokia is keeping up with its business-oriented smartphone way by unveiling no fewer than two new E-Series handsets at the Mobile World Congress in Barcelona this week. If you’re expecting something completely revolutionary with either of these two handsets, you may come out disappointed, but that’s not to say that these phones should be ignored.

The Nokia E75 was leaked on the Internet a short while ago, but now its existence has been confirmed by the cellular company. This Symbian S60 3rd Edition FP2 smartphone takes on a conventional candybar appearance with a standard numeric keypad, but it also has a QWERTY keyboard that slides out of the side.

The Nokia E55, by contrast, does not have any sliding mechanisms whatsoever. It also lacks in the numeric and QWERTY end of the equation as well, opting for a SureType-like keyboard instead. Nokia calls this a “compact QWERTY keyboard” as it maps two letters to each key.

Aside from the differences in keyboard choice, the Nokia E55 and E75 share the same feature set. This includes a 3.2 megapixel camera, GPS, Wi-Fi, Bluetooth 2.0, and a 2.4-inch screen.