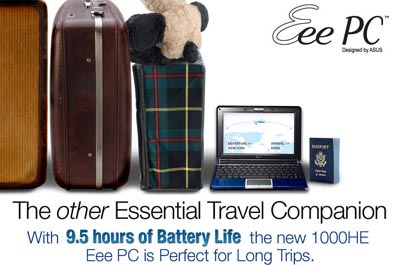 A short while ago, Asus announced another addition to its popular Eee PC line of netbooks and this newest version was supposed to bring a series of improvements over its predecessors. At first glance, the Asus Eee PC 1000HE sounds a lot like the other 10-inch Eee PCs that preceded it, but in many ways, it could be the best netbook from Asus to date.

For obvious reasons, I don’t really include something like the T91 Tablet and S101 Premium Netbook as part of this discussion, because they fall into a different kind of niche. By contrast, the Eee PC 1000HE falls into the same segment as something like the MSI Wind U100 and the Acer Aspire One.

If you happen to be in the market for a decent netbook, I’m thinking that the 1000HE could be one of your best options. No, this is not a paid endorsement and I haven’t had an opportunity to go hands-on, but this Eee has a lot going in its favor.

As I said, the Asus Eee PC 1000HE isn’t particularly revolutionary in its approach and what it brings to the netbook market, but it does seem to offer one of the best packages on the market today. Let’s take a quick look at the spec sheet.

Much like the other netbooks in the Eee PC 1000 series, this netbook comes with a 10.1-inch widescreen display. I find that this is the optimal size for a netbook. Anything bigger and you’re getting into “real” notebook territory and anything smaller and you may find yourself squinting more often than you’d like.

The spec sheet sounds pretty standard for this segment, including a 160GB hard drive, 1GB of RAM, Wi-Fi, Bluetooth, Windows XP, a 92%-sized keyboard, a multi-touch trackpad, and a built-in webcam. Interestingly, the Wi-Fi includes 802.11n, a feature that isn’t found in many of its direct competitors. Further still, while the Eee PC 1000HE gets powered by Atom, it’s the new Atom N280 (rather than the existing N270). More on the processor in a moment.

Perhaps the biggest appeal to this particular netbook is its battery life. While it makes use of a six-cell battery, it is able to pump out an impressive 9.5 hours of computing. Granted, there are a lot of netbooks using three-cell and four-cell batteries, but 9.5 hours is still a very long time.

The extended battery life comes courtesy of Asus’ exclusive Super Hybrid Engine, a technology that the company has already implemented in some of its notebooks. The Super Hybrid Engine (that’s where the HE comes from) reduces performance to extend battery life as needed, ramping up performance as it is required. In order to attain 9.5 hours, however, you’ll need to dial down the brightness on the LED-backlit display and shut off the wireless radios.

Things the Eee PC 1000HE Does Right

When I had the chance to use the Asus Eee PC 1000HA, I was very impressed with the overall build quality. It was very solid and had a natural design element to it that allowed for ample airflow beneath the netbook. This helped with both performance and cooling. My only major complaint was the placement of the right shift key, which was placed way to the right. My pinky finger could barely reach it, getting me to hit the “up” arrow more often than not.

Asus fixed this quibble with the Eee PC 1000HE, relocating the right shift key to the left of the up arrow. This is a more common placement and it will significantly reduce typing errors. That’s huge for me, since I write for a living.

The other thing that sets the Eee PC 1000HE apart, for now at least, is the Atom N280 processor. This isn’t quite the dual-core Atom that we’ve been wanting for a while now, but it does improve on the N270 that you see everywhere else. Yes, they are both 1.6GHz processors, but the N280 has a 667 FSB, compared to the 533 FSB on the N270. That should help with both performance and efficiency.

Despite some of the notable upgrades — N280, Wireless-N, extended battery, chicklet keyboard, proper placement of right shift key, etc. — the Asus Eee PC 1000HE isn’t that much more expensive than some of its counterparts.

The pre-order page on Amazon.com has it listed at US$374.00. Over at NCIX.com, they have it at $449.99 CDN. Going through the current exchange rate of about 22%, both stores are effectively selling it for the same price.

No, it’s not quite as cheap as a $200 Dell Mini 9, but you get a lot more here too. If anyone at Asus is paying attention, I’d love to give the 1000HE a test drive to see if it really does live up to expectations.