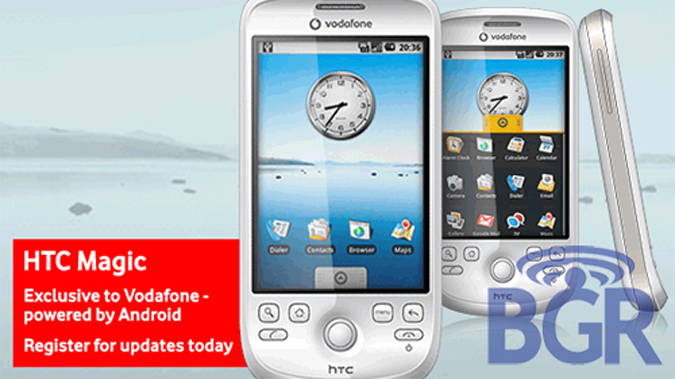 The first commercially available smartphone powered by Google Android was the HTC Dream G1, which we all came to know as the T-Mobile G1. However, T-Mobile isn’t the only one getting in on the HTC and Android action, as evidenced by the new HTC Magic.

The first Android phone was a Dream and the second one is Magic? In some circles, we have come to know this upcoming handset as the G2, largely because it is the second Android phone to come out of the HTC camp. Is the HTC Magic an upgrade over the G1 or is it simply another iteration of the same kind of thing?

Well, for starters, the HTC Magic will not be sold through T-Mobile. Instead, the Android phone will be offered exclusively through Vodafone at some point in the future. It’s also very unclear whether this will be an exclusively touchscreen device or if it will have a slide-out keyboard like the G1. None of the promo shots depict a keyboard.

We also hear that the HTC Magic will come loaded with the new “Cupcake” update, but that is far from confirmed. Other noted specs include a 3.2 megapixel camera (without flash), WiFi, GPS, and HSPA. Stay tuned for more as it develops.