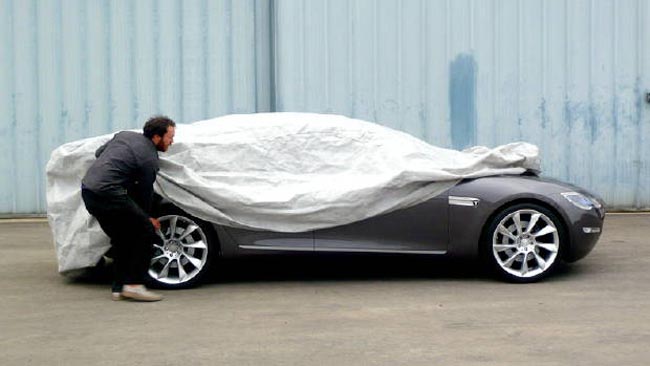 I’ve got some good news and some bad news? Which do you want to hear first. How about we start with the good news? On the brighter side of things, here is your first official glimpse at the upcoming Tesla Model S, the highly anticipated electric sedan that will be sold alongside its hot roadster counterpart. That’s the good news.

The bad news? The “unveiling” is little more than a teaser, giving us a glimpse into what the Tesla Model S can bring. We see a very streamlined profile, not unlike some of the sport sedans that seem to be infiltrating the market these days. Think along the lines of the Porsche Panamera four-door coupe. Can it still be a coupe if it has four doors?

Based on the very little of the car that we can see, the front end reminds me of an Aston Martin for some reason. The organically smooth lines are a definite departure from the sharper edges that we saw with some previous designs. Those flared fenders are pretty hot too.

It’s hard to say when Tesla will do a full unveil on the Model S, but now that we’ve been offered the first official glimpse, it shouldn’t be too much longer, right? I hope so.