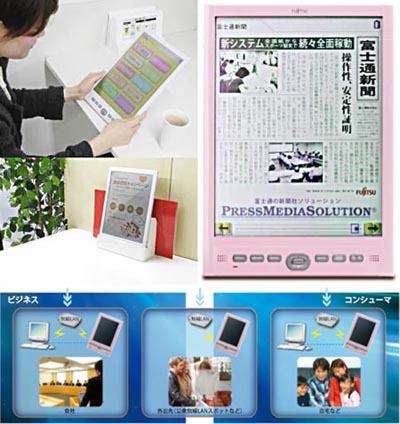 The new Amazon Kindle 2 was revealed to the world earlier this week, but it has already been rendered obsolete. Sort of. While the new Kindle will certainly be a hot item on everyone’s shopping list, the Fujitsu eBook Reader takes it one step further by offering a full color display.

The trouble with the Kindle, as you may already know, is that the e-ink display is only able to show you images in grayscale. This isn’t a huge issue when you’re reading through something that is mostly text, but it does become a concern when you have an e-book with a few more images. Black-and-white is so last century.

While the e-ink panels used on the Fujitsu handheld are similar to those used in the Kindle 2 and the Sony Reader, it is able to offer color through the company’s FLEPia technology. This is great for newspapers, books, and especially magazines. Since it uses the same kind of e-ink panels, you wouldn’t burn through your eyes reading this either.

You’ll also notice that the keyboard has been cast aside. Instead, you interact with the Fujitsu E-Book Reader through its touchscreen display. Rounding out the specs are USB 2.0, SD card slot, stereo speakers, up to 50 hours of battery life, and Wi-Fi. There’s no wireless broadband, nor is there any online store integration (as far as I can tell), so the Kindle 2 still has a leg up in some areas.

Oh, and the Fujitsu offering sells for $900. That’s almost three times as much as Amazon’s model!