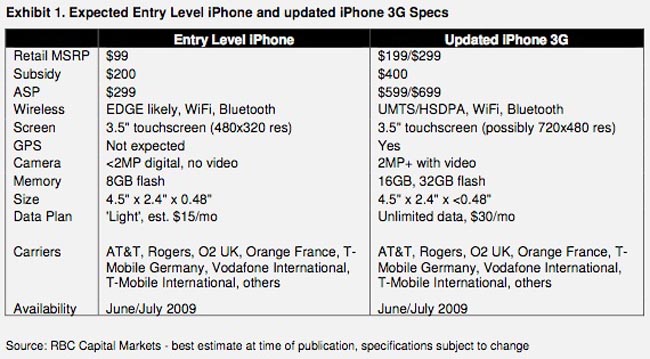 We’ve been talking about a cheaper alternative to the current iPhone for quite some time now, but it seems the latest rumors come with a spec sheet to boot.

Naturally, you’ll want to take these reports with the biggest bucket of salt that you can find, but they sound within the realm of possibility. According to RBC Capital Markets’ Mike Abramsky, Apple will “most likely” release a $99 iPhone this June or July. Not surprisingly, the cheaper iPhone comes with a few sacrifices.

For starters, it kicks it old school by getting rid of the 3G connection. You’ll likely rely on the EDGE and Wi-Fi connections for your web surfing needs. The camera will stay in the 2MP range (or worse) and there will be the entry-level 8GB of flash memory inside. The overall dimensions remain unchanged, but the 3.5″ touchscreen will only be 480×320. He expects carriers to offer a lighter $15/month data plan to accompany the cheaper iPhone too.

Continuing with his report, Abramsky also mentions the pending release of an “updated” iPhone 3G. This won’t be a completely new model, per se, but it will come with a series of upgrades. Also rumored for release this summer, the updated iPhone 3G will have a camera that does video and the internal memory will be bumped to 16GB and 32GB. The 3.5″ touchscreen gets bumped to 720×480 resolution. The rest of the stuff, like GPS and WiFi, remain intact.