The first Amazon Kindle did a great job of introducing the masses to e-book consumption. You were able to browse through the Amazon library right from the handheld itself using a wireless broadband connection. From there, you were able to purchase and download the e-books too, diving into the next vampire adventure in a matter of minutes.

Following up on the success of the first Amazon Kindle is the second-generation new Amazon Kindle 2. It improves on its predecessor in just about every way, while still retaining all the strengths of the original. As you can see through the comparison pictures below, the new Kindle 2 is a little smaller and more minimialistic than the first one.

Among the other highlights are that the new Kindle is lighter, the screen is better and flips through pages 20% faster, it features a Text-to-Speech feature with both a male or female voice, the controls are better designed with a regular 5-way joystick, storage has been increased to 2GB (7x the original, over 1500 titles at a time), battery life has been extended by 25% (up to two weeks without a recharge), it’ll download books in 60 seconds, and it only comes in white.

One of the promotional pictures clearly features Outliers by Malcolm Gladwell

, so he just got himself some free publicity. Maybe that will be one of the first few books sold when the Kindle 2 starts shipping February 24th. It’s available for pre-order now at the same $359 asking price as the original. 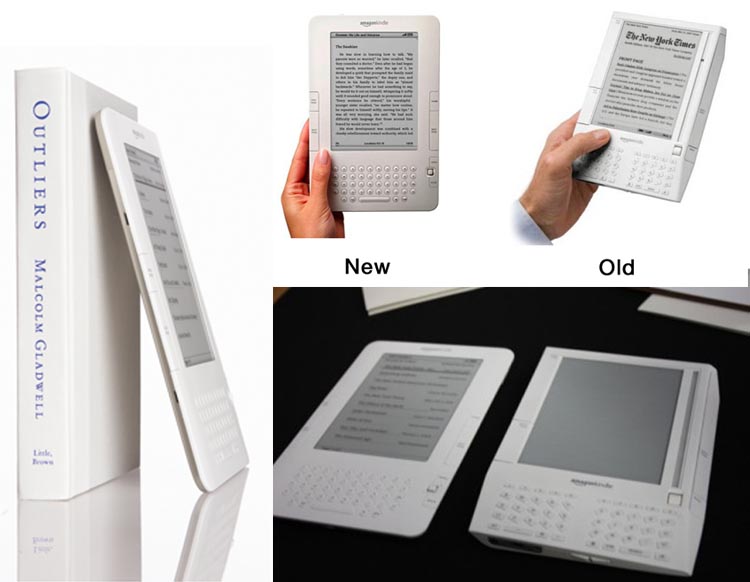