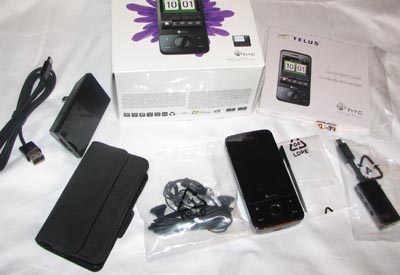 Last week, we took a look at the BlackBerry Storm 9530 from Telus Mobility. In that review, I said that while Research in Motion made the “bold” move with a clicking touchscreen, the Storm isn’t quite up to par with devices like the iPhone just yet. The capacitive clicking touchscreen is nice and all, but it still has some work that needs to be done.

This week, we shift gears over to the realm of Windows Mobile 6.1 to find the HTC Touch Pro from Telus Mobility. This smartphone is very similar to the Touch Diamond, except it has a slide-out QWERTY keyboard to ease you into your emails, text messages, and web browsing desires.

The HTC Touch Pro, as a platform, is not entirely new. We’ve seen the GSM version being sold for about half a year now and then the NAM version got released as the Fuze through AT&T. Late last year, the CDMA crew got in on the action and that’s the phone we’re looking at today. The form factor will be familiar to HTC purists, since you still get the same idea of a large touchscreen display and a slide-out QWERTY keyboard as the much older HTC Wizard (aka the T-Mobile MDA Vario, Cingular 8125, and so on).

In terms of what you get inside the box, I’ll let my unboxing video do most of the talking. There’s nothing too out of the ordinary here, though I do appreciate the double-duty that the USB cable pulls for sync and charging. Instead of a regular AC wall charger, you get an adapter not unlike the Griffin PowerBlock. The adapter can also be used for other USB-charging devices.

Compared to the Apple iPhone and BlackBerry Storm, the touchscreen on the HTC Touch Pro isn’t quite as satisfying. For one thing, it’s a fair bit smaller, making room for the keys beneath it and making for a footprint that is definitely smaller. The resistive touchscreen requires you to use a stylus (or your fingernail) rather than your finger. This is supposed to aid in precision, I suppose, but capacitive touchscreens are definitely the way of the future.

The slide-out QWERTY keyboard is really what separates the Touch Pro from the Touch Diamond. This adds a fair bit of thickness to the phone, but in my mind, that’s a small price to pay for the utility of a hardware keyboard. Some may argue that virtual keyboards are superior, but I disagree. I like typing with my thumbs on a hardware-based keyboard instead.

Unlike the AT&T Fuze, which maps the digits in a keypad-style over the letters, the CDMA Touch Pro has the digits mapped to the top row of the five-row keyboard. I prefer this layout, because it’s more similar to a computer keyboard. The only time I’d use a numeric keypad is when I’m making a call and, for that, I’d be using the touchscreen with the phone in its closed position anyway. 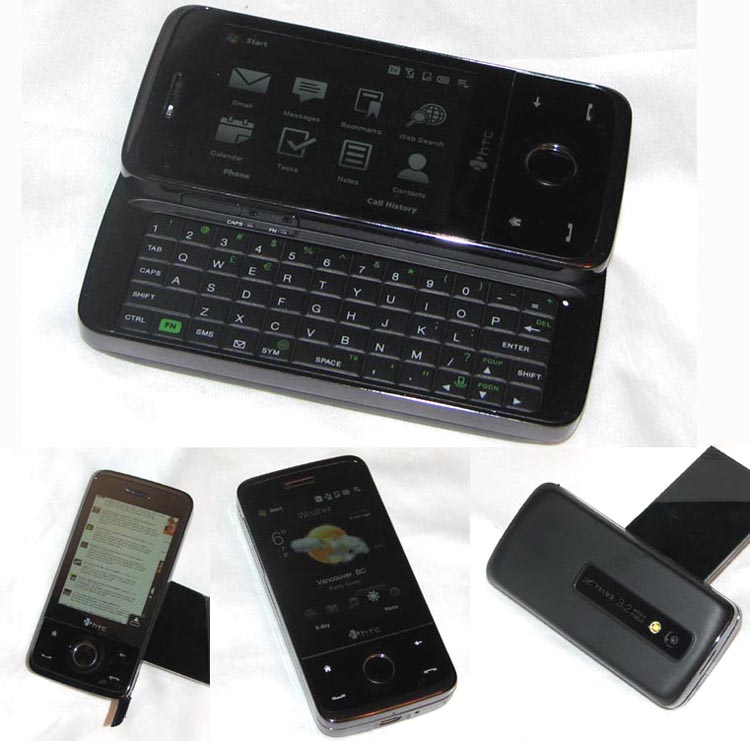 The TouchFLO 3D user interface really aids in the appeal of this phone, because running a “raw” version of Windows Mobile 6.1 Professional leaves a lot to be desired. Sliding through the icons at the bottom of the screen is a very happy experience, giving you quick access to email, contacts, weather updates, photos, and more. You can also “flip” through your email messages and picture gallery.

In the end, Windows Mobile 6.1 will still feel quite clunky to a lot of users and this is understandable, especially given the slick appearance of the iPhone or the understated simplicity of a BlackBerry. This is not the fault of Telus or HTC, per se, since they need Microsoft to come up with something a little less clunky. Hopefully we’ll see that in WM 6.5 or WM 7.0.

As it stands, the HTC Touch Pro from Telus Mobility is a very viable option for people who want to keep productive, read their emails, and look pretty fashionable while doing it. Surfing the web is a joy, but the stylus-based resistive touchscreen feels quite dated compared to some of the alternatives out there.