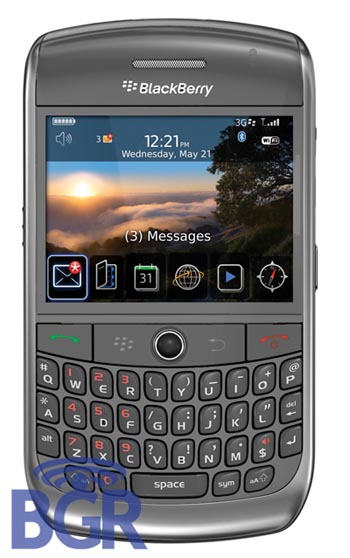 Research in Motion is busy brewing up its latest concoction and it seems that the highlight of the upcoming BlackBerry Gemini 9300 is the inclusion of 3G connectivity. Aside from the differences in physical size, the main difference between the BlackBerry Bold 9000 and the BlackBerry Curve 8900 (Javelin) is that the latter lacks in the 3G department. The Gemini 9300 aims to “fix” that situation.

As far as we can tell, we should be thinking of the BlackBerry 9300 Gemini as a Curve 3G. The model number leads me to believe that it is an improvement over the Bold, but they’re saying that it is more appropriate to compare it to the 8900 Curve.

The form factor is pretty much the same as the Curve 8900, but the 9300 will have a larger, higher-resolution display. They’ll also toss 3G into the mix, of course, as well as a “beefed-up” processor to handle all of your tasks. How this processor compares to the 624MHz CPU in the Bold remains to be seen.

Flipping through the spec sheet, you’ll also find a silver color scheme, rounded Send and End keys, a rounder QWERTY keyboard, the likely inclusion of Wi-Fi and GPS, and most likely a 3.2-megapixel camera or better.

There hasn’t been any official confirmation for a release date, but the Boy Genius is predicting something in the neighborhood of Q4 ’09 or Q1 ’10. That’s a long way away, so if you’re desperate for 3G, you’ll want the Bold for now.