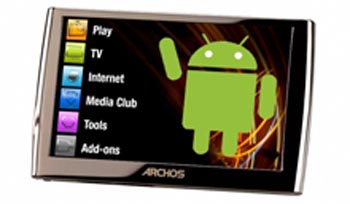 Although many people may believe to the contrary, Google Android is not restricted to only mobile smartphones. The platform can be utilized in other form factors as well and Archos is taking advantage of this possible utility.

According to a press release sent out by Texas Instruments, an Android-powered device by Archos will be unveiled at the Mobile World Congress this week. Everyone will be congregating in Barcelona to see the latest in cell phones, but Archos could have a “new ultra-thin Internet Media Tablet” there as well.

It’s not a smartphone and it’s not really a netbook either. Based on the very brief description of what we should expect, the Archos handheld will be more akin to the Mobile Internet Device market populated by handhelds like the Nokia N810.

They say that the yet unnamed Android Internet Media Tablet will be about 10mm thin, feature a 5-inch touchscreen display, up to 500GB of storage, 7 hours of video playback, support for HD video, full Flash support, and a HSDPA data connection. With Android running the show, Archos can expand much beyond their current PMP offerings.

Oh, and how does Texas Instruments fit into this picture? TI will be providing a new processor (OMAP3440) based on the same OMAP3 architecture as that found on the Palm Pre.