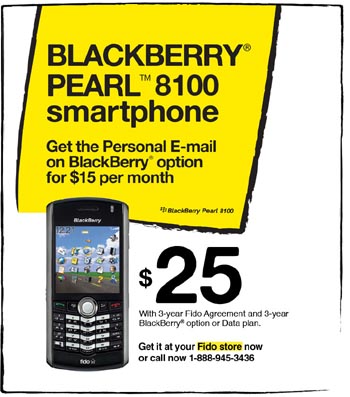 We knew that it was coming, but it’s good to see that it’s finally here. On Wednesday, Fido officially launched its BlackBerry service with full support for BIS. This was certainly a long time in the making, but has it been worth all this wait?

We already know that the Fido BlackBerry service will be restricted solely to the BIS side of things, so all the corporate types that need access to the BlackBerry Enterprise Server (BES) for push contacts, calendar, and email will still need to turn to Rogers, assuming that they want to stay within the GSM side of things.

Most people would agree that Fido needed BlackBerry to better compete against Virgin Mobile and to have a leg-up against competitor Koodo Mobile. I’m glad that BlackBerry support is here, but there are still many things that need to come to the dog house before Fido can be a true winner here.

Let’s Start with the Good

The arrival of Fido helps to alleviate some of the problems that plagued the New Fido. We know that Rogers wants to make Fido the budget-minded brand that attracts budget-minded consumers and BlackBerry is typically viewed as a premium service, but it is no more expensive than keeping an iPhone around.

The unlimited email and instant messenger pack is $15 a month, straight 500MB of BIS is $25 a month, and straight 1GB of BIS is $30 a month. With BlackBerry compression technology, 500MB will be more than enough for the average user, so long as they don’t do any tethering. That’s one of the key advantages, actually, that Fido has over Bell, Telus, and Virgin Mobile. The data really is straight data, so you can use it for tethering should you choose to do so. With those CDMA competitors, you’re limited to “on-device” capabilities.

And Then There’s the Bad

Moving on to the not-so-good side of the Fido BlackBerry equation, I can’t be the only one who is sorely disappointed to find that the Pearl 8100 is the only BB handset being offered at launch. This SureType-packing Pearl is a two-year old device! Yes, Fido wants to be budget-minded, but this is just straight up cheap. That’s not how you’re going to sell BlackBerry to the average consumer.

I would think that getting the Pearl 8120 would be a better fit, because the integrated Wi-Fi could be used for Fido UNO. The new Pearl Flip 8220 would also be much more desirable, even if it is not selling all that well for Rogers. The Pearl 8100 is $25 with a qualifying three-year contract (Fido link).

Thankfully, the leaked roadmap seems to point toward the March release of the Pearl Flip, as well as the Javelin (Curve 8900), with Fido. I’m much more interested in the 8900, because it comes with a full QWERTY keyboard rather than just SureType. The lack of 3G may hurt a little, but I doubt the Bold will be making its way to the pooch any time soon. At least, not until there is a new Bold.

Is This Gonna Get Ugly?

Yes, I am certainly glad that BlackBerry has finally been moved over to Fido. You get to have billing by the second, the absence of a system access fee, and full BIS functionality. That’s good. The Pearl 8100… not so good.

It’ll be interesting to see how well this new service performs for Fido, especially given the recent economic slump and the increasing desire for people to cut back on their spending. It’s also a shame that Fido does have the same $30-$35 value pack that includes 500MB BIS, voicemail, caller ID, and a whack of SMS. That’d help sales, I’m sure.