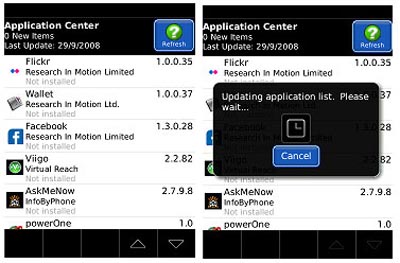 Before the emergence of the App Store for the iPhone 3G, people typically had to go through the trouble of downloading mobile applications onto their computers and then sending them over to the smartphones themselves. The App Store seriously steamlined this process by letting you browse and buy right from the handset itself.

The upcoming Application Center is supposed to provide similar functionality to owners of BlackBerry devices, but it seems that not all the Berries will be invited to the downloading party. At least, not at first. We’re still waiting on the official launch of this mobile application store, but it seems that when the doors do open, they’re only going to invite owners of the Bold and the Storm.

The environment compatibility will be restricted to just the BlackBerry Bold and OS 4.7, the latter of which is used on the BlackBerry Storm. These guys will be able to surf through the third-party applications selected by their wireless service providers, but all the other BlackBerry owners will have to sit tight until support sweeps out across the rest of the line.

This is really unfortunate when you think about the size of the installed base of people who own the Pearl, the Curve, and the 8800 series. The BlackBerry Curve 8900 (Javelin) is arguably just as popular as the Bold and it shares many of the same features, so why can’t it get in on the fun too?