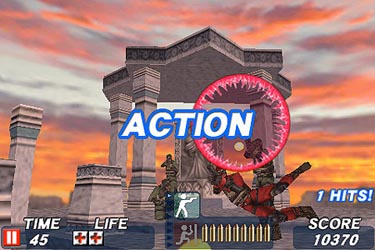 Aside from my infatuation with fighting games, one of my favorite video game genres of all-time has to the on-rails shooter. Games like House of the Dead and Lethal Enforcers (blast from the past!) were mainstays in the arcade during their heyday, but the one series that really stood out had to be Time Crisis.

If you enjoyed playing Time Crisis in the arcade as much as I did, then you’ll probably love Time Crisis Strike for the iPhone (and iPod touch). The fast-paced shooter franchise is now available on Apple’s touchscreen handheld, letting you shoot those bad guys in the face over and over again.

Shooting is done “naturally” by tapping on the images on the screen. This may not be quite the same experience as wielding a light gun, but it’s a heck of a lot more portable. One of the unique features of Time Crisis is the ability to duck and reload, so how do you do that on the iPhone? You tilt it! That’s pretty sweet, I’d say.

Time Crisis Strike for the iPhone only has three levels, but it does appear to be fairly well-designed and will provide for a good time. To get a better sense of what to expect, peep the embedded video below.