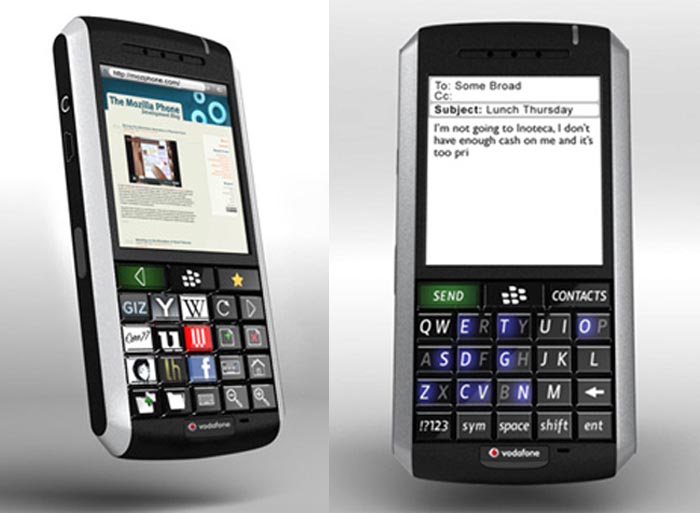 The development and design of most cell phones is a closed process, but that’s not the strategy that is being deployed for the creation of the upcoming Mozilla Phone. If the name Mozilla rings a bell, that’s because it’s the same people that put together the popular Firefox web browser, Thunderbird email client, and the upcoming Fennec mobile web browser.

The Mozilla Phone is going to be the first smartphone to be “crowd-sourced.” The project, found at MozPhone.com, will be completely open to the public and it will welcome the ongoing input and feedback from enthusiasts like you. Suggestions may or may not be integrated into the final design, but you do have your say.

Designer Billy May of Yanko Design fame is going to be teaming up with Aza Raskin of Mozilla Labs to design the Mozilla Phone. As a launching pad, they have already come up with the creation that you see here. Effectively, they took the BlackBerry 7130 and mashed it up with the Optimus Keyboard.

This is a “throw-away concept”, but it could point toward a possible future direction. The inclusion of the Optimus Keyboard is particularly noteworthy, because the regular keys on the smartphone have been replaced with tiny OLED displays, just like on the larger Optimus Keyboard.

In this way, it can provide SureType when you need to compose an email, quick shortcuts to applications when you are in a main menu, and proper media controls when you are playing your tunes. This is much more robust than something like ModeShift, because you get the versatility of a touchscreen and and the tactile response of a real button.

It’ll be interesting to see what the final (first) Mozilla Phone will look like… and it’s up to you to determine that too.