About a year and a half ago, I declared that Google has dominated my life. What started out as a relatively simple search engine has quickly grown into the absolute portal through which I digest the Internet. I use Gmail for email, Google Reader for RSS, and Google Analytics for site statistics, all through my Google Chrome web browser. The mighty search giant has already collected a lot of information about me (and nearly every other Internet user on the planet) and now they’re collecting (and sharing) even more.

Late last night, Google launched a new service called Google Latitude. This is a location-sharing service that lets you know the relative location of your friends in real time. This isn’t based on specific data that you input about yourself either, because Google is able to calculate your location (with some level of accuracy) based on how you are currently accessing the web.

They’re calling it a social networking application, since it takes on fundamentally the same service as something like Twitter. Ironically enough, it was through Twitter that I learned about Google Latitude last night and it is through Twitter that I posted my initial reaction. After a night’s sleep, my reaction has not changed: Google Latitude is the stuff of stalkers and Big Brother.

When it comes to Twitter, the idea is that you can tell all of your Twitter friends what you are doing at any given moment. When it first launched, people said that this was a little stalker-ish and voyeuristic in nature already, but your updates are totally under your control. With Google Latitude, you effectively broadcast your location 24 hours a day, 7 days a week on an ongoing basis. You get to pick who can see this information, of course, but it’s still out there.

How does Google Latitude work? If you are surfing the web at your local Starbucks, Google can determine that you are at a certain geotagged Wi-Fi hotspot and, thus, know where you are. The same can be said about when you are surfing at home on your desktop or laptop. Alternatively, you can link your Google Latitude account with your smartphone and it will literally follow you everywhere you go. Based on triangulation of cell power towers (and Wi-Fi hotspots), Latitude is roughly able to determine your location. Testing this with a friend of mine, Latitude placed him in a middle of a lake, but he only lives a few blocks from there. That’s still pretty accurate, since there is an obvious margin for error. 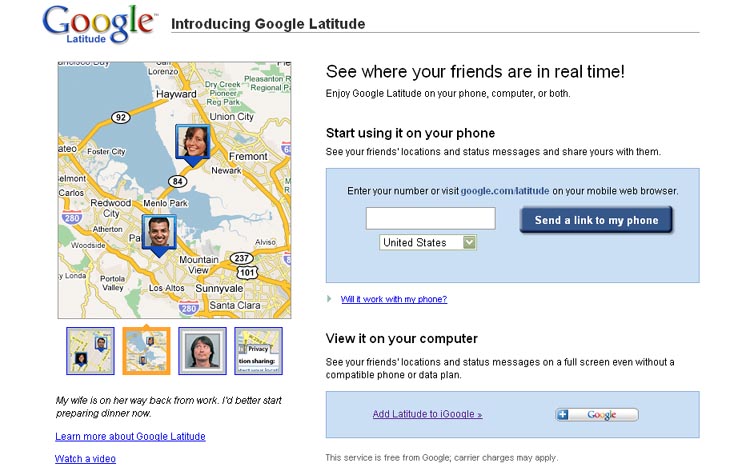 The Google Latitude application is already ready for download for BlackBerry, Symbian and Windows Mobile devices. An update for the iPhone and iPod touch is in the works, as is a system update for the Android-powered T-Mobile G1. Presumably, using Google Latitude on your smartphone uses up some of your data bucket, though it’s still unclear how much data it uses. After all, this thing is running all the time (unless you shut it off).

Our lives are online. I interact with friends via instant messenger. I share mobile technology news with you guys through Mobile Magazine. I network with past acquaintances on Facebook. I spill my insights on my blog. It’s all out there. With Google Latitude, this sentiment is taken to a whole new level.

Yes, smartphones are getting more powerful by the day and it’s amazing what you are able to achieve on those little handsets these days. From GPS navigation to high-resolution photographs, live-blogging to game-playing, they enrich and expand our lives, but Latitude scares me a little.

Boost Mobile asks, “Where you at?” With the rollout of Google Latitude, everyone will know the answer to that question. Including big brother, voyeurs, and stalkers. Am I just being paranoid?