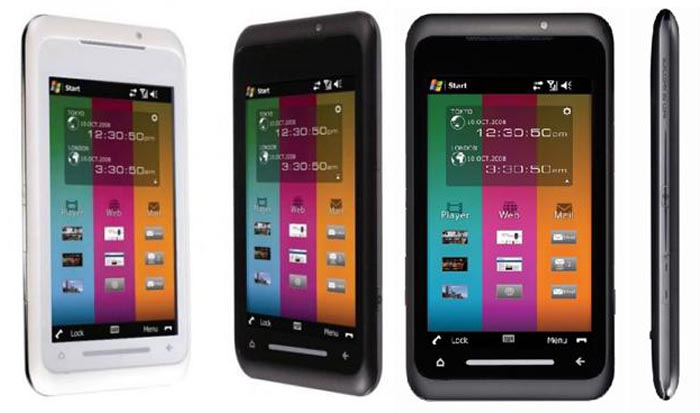 Toshiba is the official manufacturer of the Microsoft Zune portable media player, so there is a possibility that the new Toshiba TG01 touchscreen smartphone could be hinting at an upcoming Zune Phone. That possibility may be slim, depending on your perspective, but the possibility is certainly there.

As you can quite plainly see, the new Toshiba TG01 smartphone takes on a touchscreen aesthetic that is not all that dissimilar from phones like the Samsung Omnia, HTC Touch HD, and Apple iPhone 3G. The 4.1-inch touchscreen on the TG01 rocks an impressive WVGA resolution. Better still, the phone is only 9.9mm thick. That’s thinner that Cupertino’s offering.

Running on Windows Mobile 6.1 Professional, the Toshiba TG01 gets its power from a super-speedy 1GHz Qualcomm Snapdragon processor. That’s one of the fastest smartphone processors we’ve seen to date and it’ll come in handy when running the new Toshiba interface. WinMo may be the framework, but you won’t be seeing all that much of it.

Taking a quick glance at the spec sheet, you’ll find HSDPA/HSUPA, Wi-Fi, GPS, DivX support, and microSD expansion. The accelerometer is used for answering and hanging up on your calls too: just shake the phone. More information about the Toshiba TG01 touchscreen smartphone, including pricing and release date, should be made available at Mobile World Congress later this month.