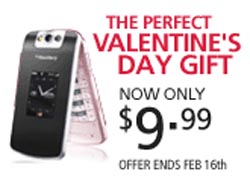 Are you on a particularly tight budget but want to score a pretty neat gift for your honey on Valentine’s Day? Chocolate and flowers are overpriced excesses when placed next to this bargain-minded BlackBerry Pearl Flip. Everyone is flipping out over the first flip phone BlackBerry and hopefully your honey will do the same.

The regular price for the BlackBerry Pearl Flip 8220 through Rogers Wireless in Canada is $49.99 on a qualifying three-year contract, but they’ve got a promo going that knocks that number down to just $9.99. You’re probably going to spend more than that on lunch!

As you may suspect, the $9.99 bargain still requires a three-year contract, so it’s almost like your gifting a 36-month shackle set, but if you know that your sweetheart has been pining over this handset anyhow, you may as well save a few bucks. And yes, there is a version with a pink keypad to boot.

It’s a Valentine’s Day promotion from Rogers, but they’ll give you until February 16th to take advantage of the discounted price. This way, even if you forget to give something on the 14th, you’ve got the weekend to hit up the mall for a last minute gift idea.

If you’re already with Rogers and you’re due for a hardware upgrade, what you could do is sign the new three-year contract under your name and hand off the $10 Pearl as a gift. This way, your present doesn’t come with that 36-month handcuff… because you keep that part to yourself.