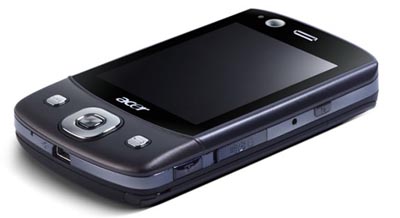 This has certainly been a long time coming, because we’ve heard rumors about Acer-branded PDA smartphones for a very long time now. We’ve already heard that the official unveiling will happen in Barcelona at the Mobile World Congress later this month, but what exactly will we be seeing?

What should we be expecting for the first Acer smartphone? Will it based on their relationship with E-Ten? Quite possibly, because we’re hearing that it’ll be a rebranded Glofiish DX900. The “new” smartphone will likely be sold as the Acer DX900, so they’re not doing much to separate the two handsets.

It hasn’t yet been revealed whether the new Acer DX900 smartphone will be making an appearance at MWC 2009, but it does make sense for them to do so. As you may recall, the DX900 is a dual-SIM number to boot, so frequent travelers will enjoy the ability to have two phone numbers in a single handset.

Other notable features include high-speed 3.5G connectivity, GPS navigation, integrated Wi-Fi, a crisp VGA display, and a 3-megapixel camera with autofocus. The rumblings are pointing toward a launch in the United Kingdom by the end of February, but the Glofiish-branded model is already available in select regions around the globe.