The Sidekick line from T-Mobile may not be quite as popular these days as it has been in the past, but this latest iteration brings the handheld into the present with several new features. We’ve heard about the new Sidekick LX 2009 a couple of times already, but we are now learning that it will be launched later this year as the Sidekick Blade. Possibly.

Poking around at the rumored spec sheet, it seems that the Sidekick Blade (which may still retain its LX moniker in some form) will get loaded with a nice 3.2 megapixel camera, a large 3.2-inch WVGA display, and microSD memory card expansion slot. There’s also that large QWERTY keyboard, 3G connectivity, and GPS location-based services. Yup, it’ll do turn-by-turn navigation too.

The key focus on the new Sidekick, as with many before it, is networking. Whereas you may have done the instant messaging thing before (and you still can), the Sidekick Blade turns its attention to social networking. The preloaded software points you toward Facebook, Twitter, MySpace, and YouTube. There’s also a blog publishing client and a Photobucket management suite.

Underlying all of this will be an open source operating system called NetBSD, coming by way of Danger. It’ll be interesting to see if there is any Microsoft influence here (Zune?), seeing how the Redmond, Washington-based firm snagged Danger a while ago. 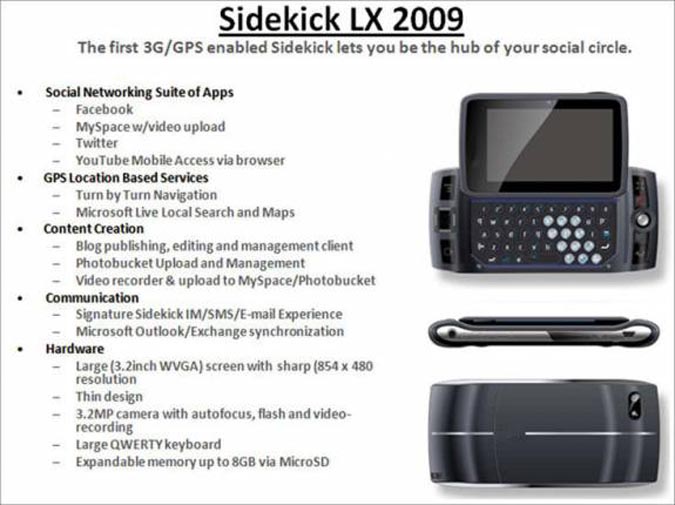