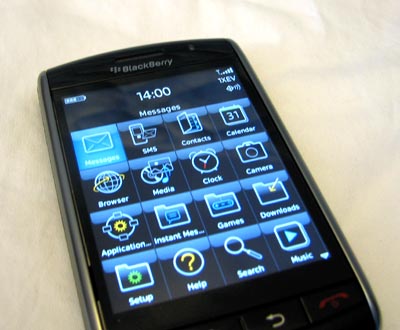 What do you get when you cross the push email goodness of a BlackBerry with the touchscreen appeal of the iPhone? Research in Motion seems to have an answer to that rhetorical question in the form of the BlackBerry Storm. Shown here as the Storm 9530 from Telus Mobility, it’s the first touchscreen-equipped BlackBerry from RIM. Not surprisingly, it comes with its fair share of first generation woes, but it does usher in a new era for the world of CrackBerries.

Before we get down to the review itself, perhaps it would be apt to take a quick look at the features and specifications on this hot new smartphone. Be sure to check out the BlackBerry Storm unboxing video that I did last week if you want to see some first impressions and take a gander at what’s included with the phone.

Although the Storm 9530 is sold through CDMA-touting Telus Mobility in Canada, it’s actually a dual mode phone. While in your local area, the Storm will latch onto the Telus CDMA/EVDO network for all of your calling, texting, and data needs. If you find yourself outside of the country, you can pop a foreign SIM card in the back to gain access to GSM connectivity. Strangely, there is no Wi-Fi to be found, but you do get GPS and stereo Bluetooth.

Unlike every other BlackBerry that came before it, the BlackBerry Storm 9530 does not have a physical keyboard at all. Instead, it completely relies on that clicking touchscreen. When you touch the touchscreen, it only highlights the item you touch. For example, touching an application icon will show you what app it is but will not load the program itself. To load the program, you “click” the screen inwards, almost giving the feel of a real button.

The same can be said about the on-screen virtual keyboard. While held in portrait mode, the keyboard shows up as either SureType or as a standard numeric keypad. For people upgrading from a Pearl, this is probably the more familiar experience. Turn the phone over to landscape mode, however, and you get a QWERTY keyboard. The cool thing is if you place your thumb on a “key”, it gets highlighted. This way, you can see if you are making mistakes before you make them, but this really slows down the typing.

In fact, I found that typing on the Storm quickly became an exercise in frustration. It could be because I very much prefer physical keyboards (though some say virtual keyboards are the wave of the future), but the touchscreen just wasn’t responsive enough. The tactile response of the clicking screen was nice, but the screen either has too much travel or it doesn’t click back up fast enough. A faster response or less travel may alleviate this issue, but it won’t fix my typos, particularly for web addresses and form entries. 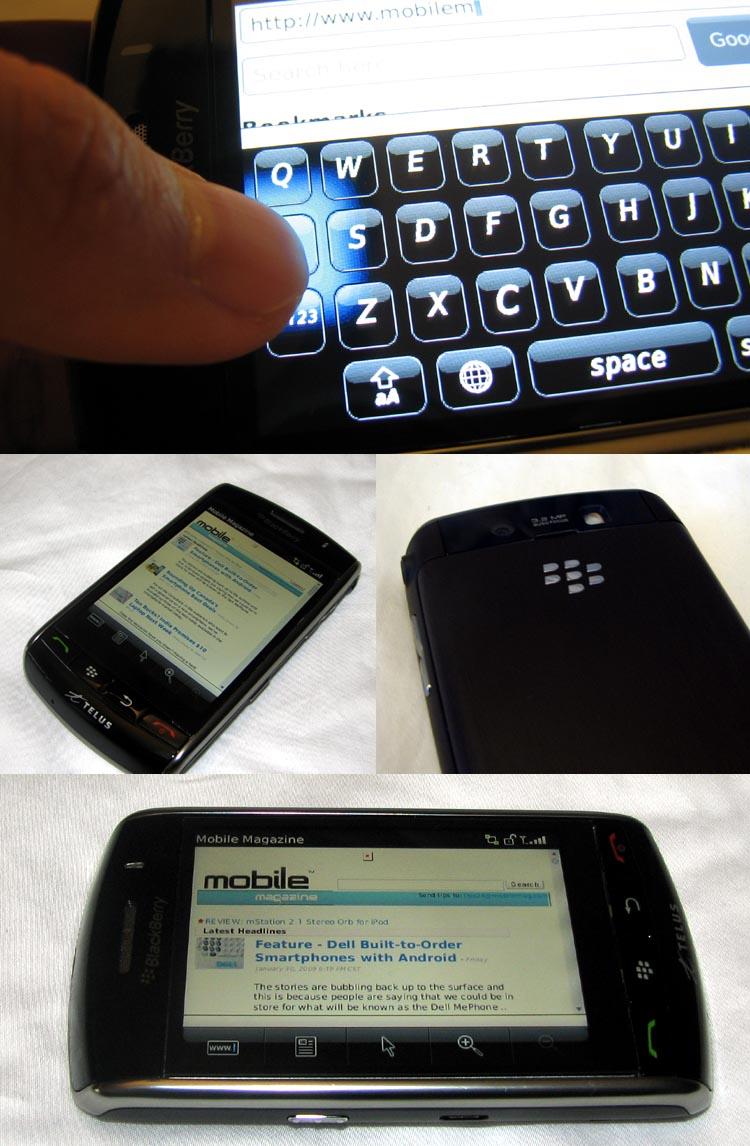 Navigating Menus and the Internet

Some BlackBerry enthusiasts will load Opera Mini onto the Storm as soon as they get it, many others will continue to rely on the preloaded Browser. In either case, the online experience is pretty similar.

Scrolling through webpages with a swipe of the finger (like the iPhone) is a very gratifying experience, but the “clicking” of links was much more challenging. It was very inaccurate and would not register my clicks. I had to zoom in considerably before I achieved any acceptable level of accuracy and responsiveness.

The on-screen keyboard would appear at the right times, but there did not appear to be any quick-key or hot-kay to make it disappear. A simple hardware button (or on-screen equivalent) for this purpose would have been greatly appreciated. Perhaps the “mute” button at the top of the phone could have been used for this.

Trying to Be All Things to All People

The BlackBerry Storm 9530, shown here in its Telus Mobility guise but available through Bell and Verizon as well, really is trying to be all things to all people.

On the one hand, it’s trying to be hip and stylish to entice iPhone users to convert to the way of the Berry, but the interface is not nearly as sleek and intuitive as its Cupertino counterpart. On the other hand, diehard BlackBerry users may find the touchscreen to be more trouble than it is worth. The increased real estate is nice, but the virtual keyboard doesn’t cut the fast-firing ways of email junkies.

Research in Motion took a bold step (no pun intended) in creating the Storm. The clicking touchscreen is probably the best tactile feedback system I’ve seen to date. Vibration and sound just aren’t the same as a tactile click. That said, the Storm still needs some serious UI tweaks and an improved keyboard response in some way. It’ll add some bulk, but perhaps a BlackBerry Storm Slider could be the best solution for all parties involved. For now, I can’t recommend the Storm.