If you work with digital content – be they photos, music or even documents – you’re going to need a storage solution.

CDs and DVDs have a limited shelf life and are unwieldy if the data you’re storing is larger than 4GB. That’s where portable hard drives come in.

External drives, at least those that are portable, are typically between 160GB and 500GB (and increasing every day). They are often plug-and-play, so moving your data is as easy as plugging in a USB cord and dragging your data to the drive to back it up. And now they’re even coming in secure, standalone models.

One such device is Lenovo’s ThinkPad USB Secure Hard Drive – $219MSRP for 320GB – $179MSRP for 160GB. They put the word Portable in the name too, but it’s just about the size of a slice of bread so I think mentioning that is redundant.

The Secure Drive’s claim to fame is that it’s lockable. Recognized as a Consumer Electronics Show 2009 Innovations Award nominee, the drive has a keypad on the front that provides all access. Without a password, this drive won’t start spinning and remains invisible to your computer.

But how’s it work? Let’s go from box to backup…

In less than a minute I had it hooked up to my laptop. Immediately I was annoyed with the short cables and the decision to use a second USB for a power source. If you plug both USBs into your computer you’ve likely taken up all the ports. If you have a USB power outlet, you’ve freed up a port but now you’re tethered to the wall.

I’d have preferred a standard power cord, a single USB that powers the device and moves data, or a rechargeable battery in the drive.

Annoyances noted, I stared at the drive for a moment and saw the bright red LED. According to the manual that means the drive is parked and locked. I punched in the default password and clicked the unlock symbol and the drive spun and showed up immediately on my desktop.

My 320GB drive showed a capacity of 297.99GB and showed me two items on the drive – a system volume folder and a .pdf user guide. 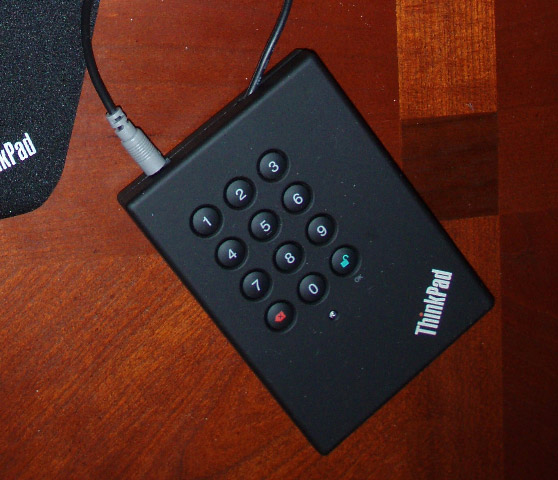 The drive can have up to 10 user passwords, so you can let others have access to the drive. From what I could see, there is no way to set different levels of access. In fact, the guide isn’t really comprehensive. It tells you how to enter different modes and change passwords, but it doesn’t go through basic use of the drive.

Although the drive showed up on my desktop, I found that it remained read-only regardless of whether I used an admin or user password. My main computer is a Mac, so I borrowed a PC and the drive worked flawlessly.

The reason for this read-only state on the Secure Drive is that it has been formatted by a PC in NTSF mode. What that means is that if you have a Macintosh, this drive won’t work for you.

I called Lenovo about the issue and they agreed. They told me the only way to get a PC-formatted drive to work on a Mac was to format it differently, but doing so would make the drive incapable of reading files larger than 4GB each.

To me that didn’t seem like a major limitation – I can’t think of many 4GB files other than really large HD movies and maybe image files of DVDs or video games.

Voila! Now I had a Secure drive that worked perfectly with Macs and PCs and had a full 320GB capacity.

Back to the test…

Moving files, deleting, copying and saving data was easy. I was able to read and copy the data on my Mac or PC and when locked down, the drive protected the files perfectly.

Ejecting and disconnecting the drive puts it back into locked standby mode, so whenever you’re done using it your files remain safe.

Here are my thoughts.

The size and the feel of this drive are great. It fits into a pocket or laptop bag easily. The grippy exterior ensures you won’t fumble it.

I like the ability to set different passwords quickly. I like that it shows up on your desktop quickly. And I like the simplistic black design. Your stuff is completely protected by passwords you choose.

Instructions are heavy on password setting and completely devoid of hard drive operation. Bad for the basic consumer who knows little about drives.

Out of the box it wasn’t writable on the Mac. Jumping through a hoop or two released the drive’s full capability on my preferred platform, but that’s not how hardware should work.

Cords are way too short. I understand that portable is important, but portable doesn’t mean minimal.

Port hogging. Two USBs for one tiny drive is annoying.
Pricey. You can get a similarly sized drive for $80 without the security feature.

Only has USB support.

Unless the price comes down and the glitches in Mac compatibility are ironed out (again, this might be a Windows/Mac issue and not Lenovo’s fault), the ThinkPad USB Portable Secure Hard Drive doesn’t make the cut.

Even as a PC-specific device, it’s too expensive for anyone who is looking for an affordable way to securely transport their data.