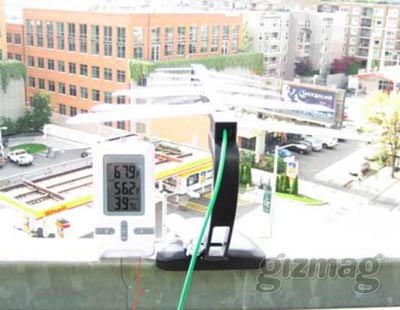 We’ve seen a few concepts for wireless power, allowing you to charge your iPod or BlackBerry without a physical connection to a cable, but this is something different altogether. Intel is working on a solution that would be able to harvest ambient RF energy, gathering enough energy to power a household weather station.

The Intel researchers described this ambient RF energy harvesting technique as an extension of what is already used with off-the-shelf RFID tags. With those, the unpowered ID tag is able get its power supply wirelessly from the tag reader. There’s just enough power for the tag to run through its paces so that the tag reader can, well, read it.

With RFID technology, the tag and the tag reader have to be in very close proximity. With the technique being developed by Intel, the weather station can get its power from a TV antenna pointed at a local TV station antenna four kilometres away. That ambient energy is sufficient to power the weather station, complete with an LCD screen.

Here is a more technical explanation for those of you who are interested:

The Intel Researchers set up a TV antenna on a balcony with line of sight to the KING-TV tower 4.1 km away. The TV station broadcasts on channel 48 between 674 and 680 MHz with an effective radiation power (ERP) of 960 Kw. The TV antenna used was a UHF log periodic with 5 dBi gain connected to a 4 stage charge pump power harvesting circuit of the same design as that found in an RFID tag. Across an 8 KOhm load the team measured 0.7V, corresponding to 60 microwatts of power harvested. That was enough to drive a thermometer/hygrometer and its LCD display, which is normally powered, by a 1.5 volt AAA battery.