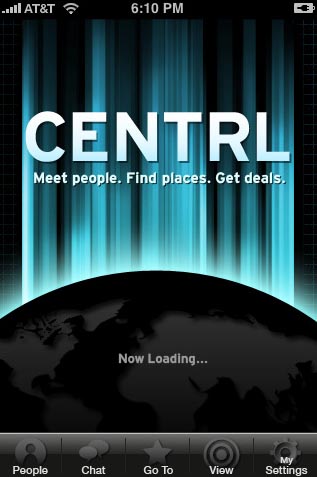 Two trends are quickly rising in popularity: iPhone apps and social networking. The two are now combined with the new MyCentrl App for the iPhone, but this one is for reserved only for the socially elite. Well, I shouldn’t say socially elite. It’s probably more accurate to say that it’s reserved for people with more money than they know what do with.

Do you remember the incredibly useless I Am Rich application for the iPhone that was sold last year? Remember how it cost $999.99 and did absolutely nothing? MyCentrl is pretty much the same kind of thing, but it does seem to have an inkling of functionality.

Like the “I Am Rich” app, MyCentrl is available through the App Store for a penny shy of a thousand dollars. This is clearly no small sum, but it seems that it does offer some form of social networking. The single released screenshot teases us with buttons for “people” and “chat”, leading us to believe that we’ll be able to do three things: “Meet people. Find places. Get deals.”

I suppose I can understand the first part. The second part hints at some sort of mapping or directory function. The third part? If you’ve got $1000 to spend on an app like this, you probably aren’t too bent on finding the best of deals, I’d imagine.