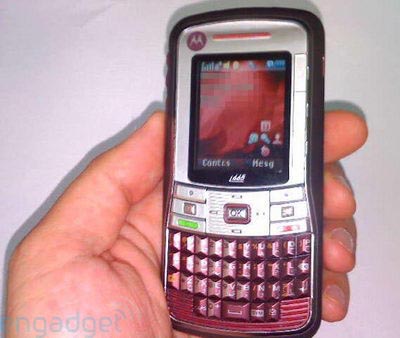 Everyone seems to be falling in love with QWERTY phones these days, no longer restricting the feature to the realm of corporate and business users. Teenagers want the QWERTY for ease of text messaging, for example. Even though smartphones and messaging phones have been doing the QWERTY dance for a while now, it’s interesting to see that Motorola hasn’t produced a QWERTY phone with iDEN yet. That has now changed.

This may have been a long time coming and the handset may be far from the prettiest thing in the world, but the i465 is the first ever iDEN phone from Motorola with a full QWERTY keyboard. As with most other iDEN phones, the Motorola i465 is a slightly ruggedized number that is well suited for industrial and outdoor applications.

Aside from the QWERTY keyboard, the Motorola i465 doesn’t bring too much to the table. You don’t get Windows Mobile, because this is not a smartphone. It’s a “feature” phone. Rounding out the feature set are a VGA camera, Bluetooth, and push-to-talk.

If you’re working at a construction site and want some QWERTY, the i465 may be your only viable option. Then again, aren’t there rugged BlackBerry devices that do the iDEN thing too?