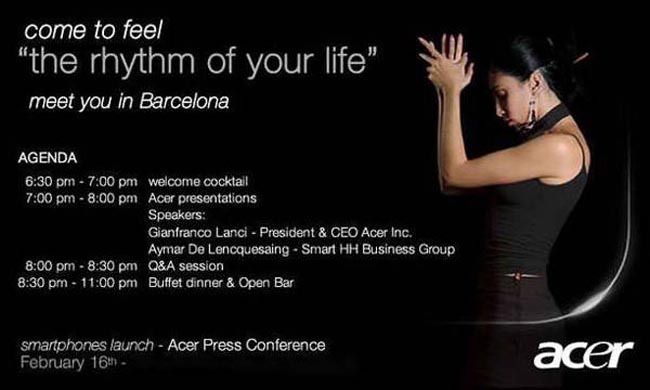 More and more people want smartphones these days. Gone are the days when only guys in three-piece suits would bandy around town with smartphones, because everyone from soccer moms to tech-savvy teenagers can find plenty of fun and functionality in a smartphone. And Acer wants a piece of this growing pie.

Acer is joining some of its fellow Taiwanese compatriots with the pending release of a new Acer smartphone. We’ll be officially seeing this handset for the first time next month during the Mobile World Congress. Acer wants everyone to know about this momentous occasion too, throwing quite the party in Barcelona.

Inviting you to come and feel “the rhythm of your life” in Barcelona, Acer will be hosting a press conference on February 16th, unleashing its first smartphones onto the world. We’re not entirely sure what to expect at this point, but I fathom that we’ll have an iPhone-esque touchscreen smartphone as part of the mix. There may be a sliding QWERTY phone in there too.

For a better glimpse into what Acer may have for us next month, it is perhaps a good idea to consider what E-Ten has produced in the past. After all, Acer nabbed up the experienced smartphone maker last year for exactly this purpose. Get ready for some “leaked” mockups in the days leading up to MWC09.