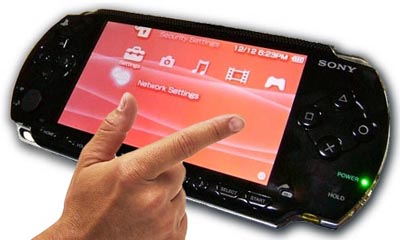 Whereas the Nintendo DS has been doing the touchscreen thing for quite some time now, it seems that Sony may soon be joining that arena with a touchscreen PSP of its own. The current PSP is a decent-enough portable video game handheld, but it needs something to bring it back to the bleeding edge of technology.

According to “several credible sources” reporting to IGN, the next Sony PSP will feature a widescreen, multi-touch capable touchscreen. This opens up all sorts of gaming possibilities, of course, as well as applications for secondary functions like the web browser, video player, RSS aggregator, and so on.

A recent survey asked if people would be interested in a touchscreen PSP and companies don’t ask these kinds of questions if they don’t have any interest in pursuing these kinds of features. Then again, I hear that Sony has officially denied these rumors… at least for now. A lot can change in a couple of months, so we’ll stay tuned.