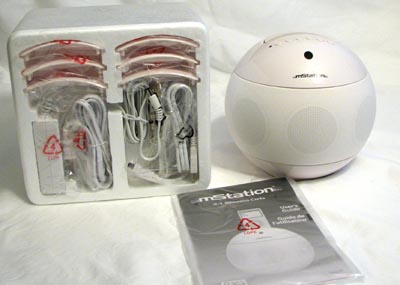 Most people think of the Apple iPod as a portable music player, one that can be used to keep you sane during that dreadful commute to work in the morning. That said, many of us are starting to rely on our iPods for home entertainment as well and that’s partly why iPod speakers have quickly become so darn popular.

Some time ago, I took a look at the Griffin Amplifi 2.1 sound system and today, we take a look at the mStation 2.1 Stereo Orb, an iPod speaker dock of a different sort. Whereas the Griffin Amplifi is a little more conventional with its boxy appearance, the mStation Orb is a spherical source of aural entertainment. Don’t let its relatively small stature fool you, though, because it actually packs a decent wallop.

It’s a ball and it pumps out the tunes sourced from your iPod. The functionality of the mStation 2.1 Stereo Orb is pretty straightforward, so if you are expecting something completely out of the ordinary here, you’ll be sorely disappointed. If you’re looking for a compact speaker that lets you share your latest Britney Spears purchase, this may be the ticket.

In terms of features, the mStation Orb is a 2.1 speaker system, so you get a pair of stereo speakers as well as a dedicated subwoofer for extra thump. The subwoofer is very important, because without it, the speakers would leave much to be desired. You get 30 watts of total peak power, a 10 key IR remote, and 6 cosmetic docking cradles to handle a variety of iPods.

Around the back, you’ll notice that there is a stereo mini jack in case you want to feed in some audio from a source other than an iPod. The mini-USB port allows you to connect the mStation Stereo Orb to your computer as well, effectively transforming it into an iPod dock.

In the Box and a Look Around

As mentioned above, the mStation Orb comes with an assortment of docking cradles to better hold your iPod in place, but these are largely unnecessary. I was able to insert my thrid-gen iPod nano without one of these adapters and it seemed sturdy enough for me.

The basic wireless remote is credit card style, so the footprint is a little bigger than the tiniest of remotes, but it’s also reasonably slim. From the remote, you can do basic things like turn the system on, adjust the volume, play/pause, and advance to the next track. You can also adjust the bass and treble from here.

The downside, much like the Griffin Amplifi that I reviewed late last year, is that the mStation Orb does not have any display whatsoever. In this way, you’ll have to “play it by ear” for adjusting the volume, bass, and treble. Furthermore, you’ll have to rely on the screen of your iPod to see what song you are currently playing. A minor quibble, I suppose, but when I’m across the room, I want to know what I’m playing. 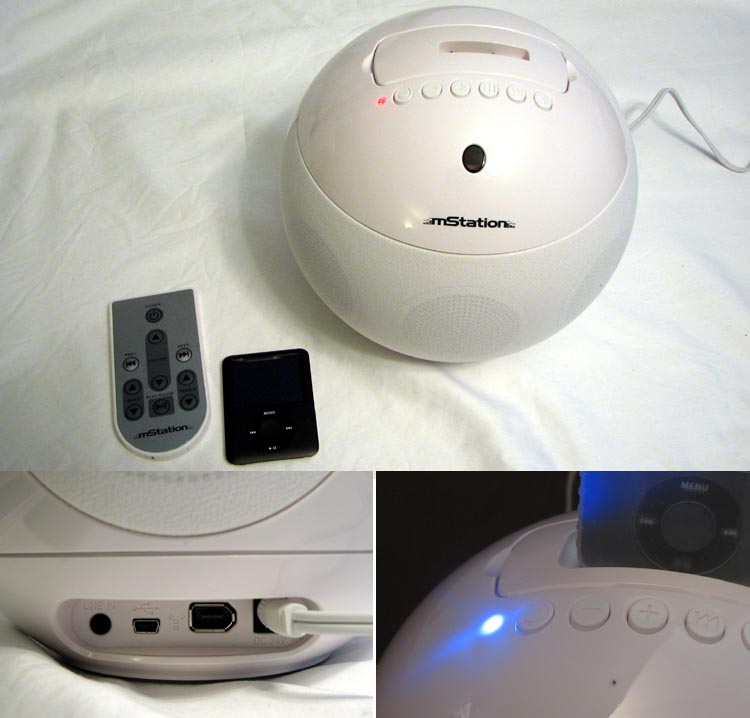 Ground Effects for the Best Effect

According to the product page, the mStation Orb is meant to be a desktop speaker system for small spaces. This makes it a good solution for home offices, dorm rooms, and other places where you may not exactly have a lot of real estate.

It’s marketed as a desktop speaker system, but I found that the Orb had the best audio quality when I placed it on my hardwood floors. I’m venturing a guess that the subwoofer is downward firing and this may explain the deeper rumble that I got with this placement. Holding the Orb in the air made it much less satisfying and placing it on my table sometimes resulted in undesirable vibrations.

Overall, the sound quality on the mStation 2.1 Stereo Orb is quite impressive, especially given its reasonably compact size. With an MSRP of about $130 (though currently on sale for $80), it’s not terribly expensive either. I just wish it had a rudimentary display.

No Nonsense, But It’s Colorful Too

If you’re looking for an iPod speaker dock that can output video content to your HDTV, you’ll need to look elsewhere. If you want Bluetooth functionality, a high-end remote, or any extra functionality, you’ll need to consider a different solution. If you want a good speaker for your iPod that won’t take up a lot of space, the mStation Orb is a good option. In addition to the white version pictured here, it also ships in black, blue, green, pink, silver, and red, so you can get one that matches the color of your iPod too.