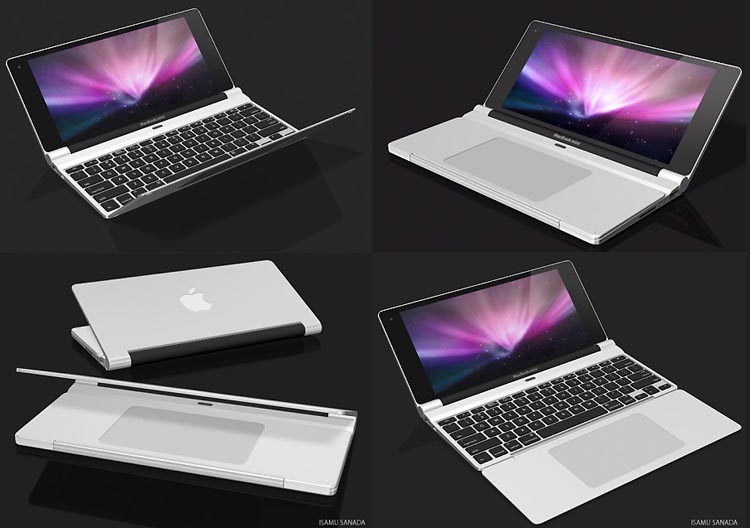 Considering how much talk there is about a Apple netbook of some kind, I really think that the guys in Cupertino should give this some serious thought. They have gone on the record that that they have no current interest in the netbook market, but they are keeping an eye on it. The introduction of the Sony VAIO P could pave the way toward a premium netbook from Apple, but for now, it’s a pipe-dream for Apple enthusiasts.

What would a MacBook Nano or a MacBook Mini look like anyhow? You know Apple would bring something new to the table and this latest concept rendering offers us a glimpse into what is possible. Whereas all other netbooks take on the “mini-laptop” appearance, this MacBook Mini is a tri-fold.

The ultra-wide display and overall layout is similar to the Sony VAIO Pocket, but the extra flip-out portion is what makes this concept so interesting. You’ve got a 10-inch widescreen on one flap, the keyboard on another flap, and a large multi-touch trackpad on the third flap.

When you’re only doing some web surfing and don’t intend on typing anything, you can rely solely on the trackpad. This is almost as ridiculous as the MacBook Wheel, but at least you can have the regular keyboard when you need it.

I’m not entirely sure how that third flap would work though. Looking at the provided images, it looks like the trackpad is on both sides of the last flap, doesn’t it?