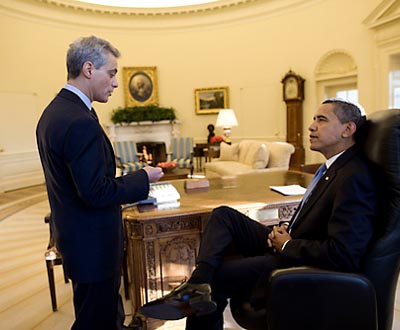 Barack Obama is easily the most technologically-connected President that the United States has ever seen, but will he be able to have a computer in the Oval Office?

We’ve already learned that he will keep his BlackBerry, but what about surfing the Internet while sitting in the Oval Office. As you can quite plainly see, there is no desktop computer on his desk at this time and, from what we hear, there are no plans to change that situation.

He could bring a laptop into his office, since Bill Clinton did that, but he would need to use a wired connection for Internet. For security reasons, there is no Wi-Fi in the White House. Further still, the Interwebz has been severely crippled, leaving the Commander-in-Chief without direct access to Facebook, MySpace, YouTube, Twitter, blog commenting, and all sorts of other things.

This is pretty ironic, if you think about it, because the Obama campaign leveraged so many of these online tools and social media services to get him into the Presidency in the first place. Now that he’s there, he (and his associates) won’t be able to YouTube and Tweet anymore? How is he supposed to do those weekly YouTube addresses? Maybe he needs to write another book, this time on the “hope” of the Internet.

Then again, Obama can just load Qik on his ‘Berry, can’t he?. Yes, he can.