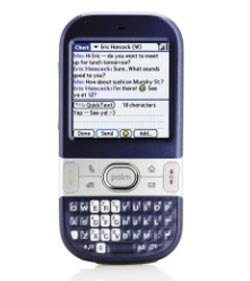 Well, this took quite a while. The Palm Centro is far from being a new phone anymore, having already been available through a number of providers for quite some time. It serves as a good entry-level smartphone, mostly because it is reasonably simple and remarkably inexpensive. At under $100 with contract, it’s pretty cheap for a smartphone.

Bell Mobility is finally on board with the Palm train, bringing a CDMA version of the Centro to Canadians early next month. Yes, it’s been available through Rogers since last June, but the CDMA crew in Canada has been left out in the cold.

The features aren’t going to blow anyone out of the water and it’s nowhere near as exciting as the Palm Pre, but it’s a suitable entry-level phone. You get a 1.3 megapixel camera, QWERTY keyboard, touchscreen with stylus, MP3 player, email, and so on.

The good news is that the launch promo has the Palm Centro going for $49.95 with a three-year contract. Unfortunately, if you miss the promo period, this phone will run you $200 with the same three-year contract. The price for the phone with a two-year, one-year, and month-to-month have been set at $250, $350, and $400, respectively.

Look for the Palm Centro to hit Bell on February 2nd. Personally, I think waiting for the Pre is a better idea.