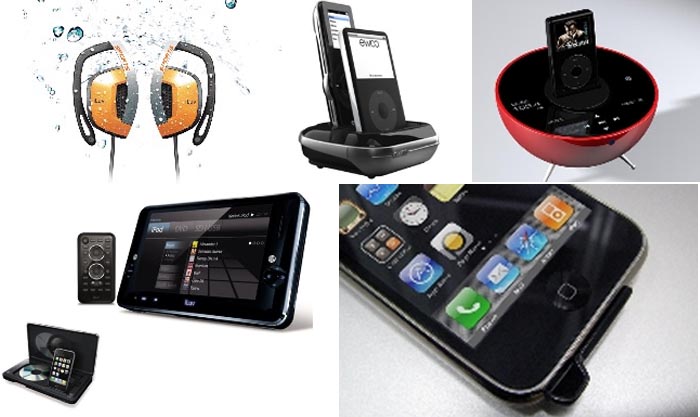 The Consumer Electronics Show has just about everything under the sun, but one of the areas that continues to be pretty fun is in the iPod accessory market. Apple’s famous portable music player, as well as the Apple iPhone, continue to provide a lucrative platform on which to expand and grow. As a result, nearly every company has something that connects, augments, or supplements the iPhone and iPod in some way.

Shown in the top-left corner of this article are the Future Sonics Atrio m8 premium earphones. These are some of the best earphones that I have used in some time, offering dynamic and powerful sound for a wide range of music. These are professional-grade earphones and they are used by everyone from Miley Cyrus to Carrie Underwood, Justin Timberlake to Alicia Keys. If they’re using it, you know it’s good stuff. Retail price is $199.

Taking a slightly different approach to the headphone market are the iLuv i303 in-ear sports clips. These are designed largely for people on the go, especially those who sweat it out in the outdoors or in the gym. They’re waterproof and sweatproof, so you don’t have to worry about getting them wet. The in-line volume control is a small feature, but one that is missing from so many headphones. Thankfully, the i303’s got that going on. It’s priced at just $30.

iPod docks can be quite useful, but it’s a pain when the remote gives you very limited information, if any at all. The Ewoo HandMusic overcomes this concern by providing a remote that mirrors your iPod’s display. Set playlists, browse content, and do anything else that you would normally do your iPod. The 1.8-inch display on the 2.4GHz remote shows everything that you would see on the iPod display itself. It sells for $200.

Despite its outdoor barbecue-like appearance, the Scandyna Amp2 is actually a really high-end speaker system for all kinds of iPods. With a retail price of $699, it’s clear that Scandyna is hitting the premium end of the market with this amplified docking station. In addition to the iPhone, it’ll also handle FM radio, USB, phono, and mini-jacks. Look for it in your choice of black, white, or BBQ red.

Portable DVD players might be a thing of the past, but they receive new energy via the iLuv i1166, a 9-inch portable DVD player that also happens to have a slot for iPods and iPhones. It’s also got video output for TV connectivity, making it a terrific travel companion. I just hope the battery holds up for a Peter Jackson marathon. Thankfully, it comes with 12V and AC chargers too, in case you happen to use it on a road trip. The included car-strap can be used to mount on a headrest too. Look for it in July for $249.

Last but not least, we have the SoundClip from Ten One Design. Priced at eight bucks, it is a passive sound enhancer (adds up to 10dB between 6kHz and 20kHz) for the iPhone 3G that directs the iPhone speaker’s sound toward the user for increased volume and clarity. It’s particularly effective during gaming sessions, for example, where your hand may be blocking the speaker. Simple but effective.