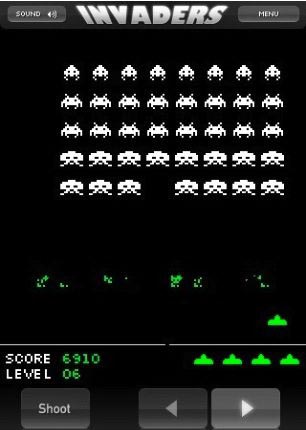 Even though the Apple iPhone 3G is one of the more advanced mobile phones on the market today, owners still have a soft spot for retro technology. That’s why unofficial NES and SNES emulators are so popular on the touchscreen handheld. Going even further down nostalgia lane, we find an ancient arcade classic.

If you’ve ever dunked a roll of quarters into that arcade cabinet in the 1980s, then you’re probably familiar with a game called Space Invaders. It didn’t quite reach the same level of fame as the Pac-Man franchise, but many of us played way too much Space Invaders back in the day. Thankfully, you can get as much space invading as you’d like for the price of just four quarters.

Don’t pay for extra continues or anything like that, because the Apple App Store has now been loaded up with a virtual version of Space Invaders for just $0.99. It boasts the same look and feel as the original and it will work for both the iPhone and the iPod Touch.

To add a touch (no pun intended) of novelty, you can move your ship across the screen by simply tilting your iPhone. The accelerometer will measure your movements and translate this to your ship’s movements. If you prefer, there are also on-screen buttons as well.

For some strange reason, Space Invaders is not being loaded onto the American App Store. Are there copyright issues holding it back?