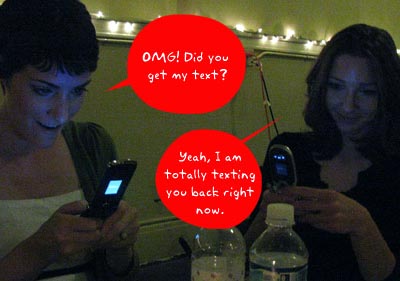 If you have been following mainstream media for the last couple of days, you may have heard about a 13-year-old girl who sent 14,000 text messages in a single month. That sounds like a lot of SMS, but it pales in comparison to the official world record.

A 14-year-old girl from Florida, for instance, used her Sprint phone to send and receive somewhere in the neighborhood of 35,000 text messages. This wasn’t just one freak of nature kind of month either, because she repeated the feat at least one other time. For those of you looking to crunch the numbers, this works out to nearly 1200 text messages a day.

Given these two examples, you’d almost assume that teenage girls were the SMS rulers of the land. Wrong! As it turns out, the person who holds the Guinness World Record for text messages sent in a single month is Deepak Sharma, a grown man. Whereas those girls were able to bring their text messages into five figures, Mr. Sharma bumped it up to six figures.

The current record calls for 182,689 messages in a single month. This works out to 6,100 messages a day or 4.2 messages a minute. In this way, he was effectively sending or receiving a text message every fifteen seconds. These guys had better have unlimited texting plans, because if they were paying for each one at 20 cents or so, Deepak would owe over $36,000 for that month in SMS charges alone.

I’m clearly well behind this trend, as I’ve never sent more than 100 text messages a month.