Like tech reporter Michael Kwan, I spent four+ crazy days on the show floor at CES in Las Vegas as vendors got their game on.

I kicked tires – literally – where companies were featuring automotive tech, and I took a ride in an Indy Car simulator. Tech from this simulator is being used by the armed forces to put pilots and other soldiers through their paces.

But car tech was just the tip of the iceberg when it came to devices that made my eyes open with anticipation.

There was iHome’s new audio system that’s said to decompress MP3 files (not available until later this year – priced around $300 to compete with Bose speaker systems).

There were new wireless headphones – TV listeners – from Able Planet that allow one person in a room to listen to audio at whatever volume they want. Great for guys who want to watch sports at deafening levels without disturbing the family. They’re also great for anyone with some hearing difficulty because they can adjust the sound individually without affecting other viewers or listeners. 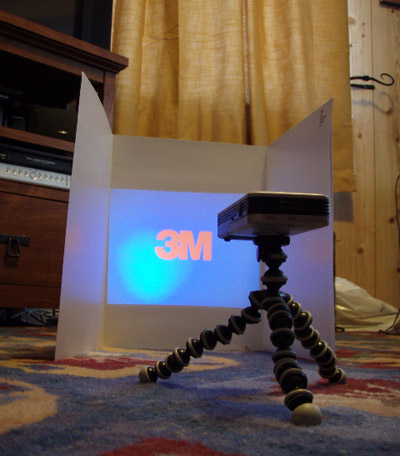 Pocket projectors from Optoma, 3M and others that allow you to share video up to 50-inches wherever you have a surface to shine them. Your computer, MP3 player and some phones can plug right into them to share content

This amazing tech – as small as a deck of cards or a small box of candy – is soon going to be in our cellphones too. Samsung has already announced a model – The Show – in Korea and plans to bring it to the United States in 2010.

EzGear and about five other companies I saw had game-pack accessories for the Wii. EzGear’s stuff was specific to some sports games and Wii Music. The Wii Music Pack lets kids put the Wii controllers into plastic formed instruments so they’re not just flailing in the air, but waving real drumsticks, a violin or a saxaphone.

What about higher tech? How about ClickFree’s no-nonsense, no-clicking backup system? Just buy their drive (or the ClickFree USB device) and you can back up all your computer’s files, Mac, PC, whatever, without doing anything.

The software finds only your files and backs them up. No fuss, no fretting. It will allow you to adjust settings and restore specific files, but this thing is made to be plug-and-play to the extreme.

There were even two companies – at least – selling products that convert your PC or Mac output to HDMI signal for use on your home HDTV. Atlona’s solution is called HDPix and it converts USB to HDMI using a box the size of a small notebook. For $179 it might be worth it for people who want to overlay their fantasy football stats over the current NFL playoffs. And it would be great for online poker or watching movies from your laptop on the big screen.

What did I shake my head at? ASUS, MSI and others have netbooks that are crazy powerful. The ASUS ‘books now are going to feature touchscreen technology while the MSI guys brought out the X320 that is thinner and lighter than the Macbook Air. I was tempted to buy it – install Linux – then hide in my hotel room for the rest of the show.

HDTV specialists showed us 3D like nothing we’ve seen before.

And more manufacturers than you could find in a phonebook were presenting accessories for everything from iPods to luggage. Case in point, all press who attended a Thursday night event at the Wynn Hotel received an evaluation model of a digital luggage scale.

Even knife maker Victorinox was at the show with a biometric USB drive in the body of a Swiss Army Knife. I’m serious. So what did I walk away with mentally? I realized that there’s technology overload. Everything we see needs to be smaller, faster and more fun than ever before. Did I mention that SanDisk came out with entertainment on microSD cards? These freaky cards are as small as your pinkie fingernail. And they’ve got them that hold 1000 songs!

Or have you seen Corsair Memory’s Survivor or Voyager series of USB drives? They put 64GB of memory on a regular sized flash drive that is waterproof and built to last for life.

In fact, the company saved my butt on Tuesday when I had to borrow a couple 4GB drives from them to save audio for an NPR radio show.

While most of the tech I saw at CES definitely solves a problem and partially answers a need, I wondered why we’re so needy. Do we really need phones that project movies on any wall? Do we need to print 3D objects in nylon at the push of a button? And does everyone need to have computers that weigh nothing yet do everything?

If you’re reading this, you feel the same way I do. YES! There was so much I didn’t even get to see at the show and that means I’ll be watching Mobile Magazine for the next few weeks as Michael adds his reports. I’m anxious to find out how I could have missed the mind-moving game from Mattel, the scuba camera from Panasonic, or the taping of Jeopardy on site at the Las Vegas Convention Center.

For now I’ll just sit here in front of my TV with my Able Planet headphones on and turn the volume way up. I think there’s got to be a game on somewhere.