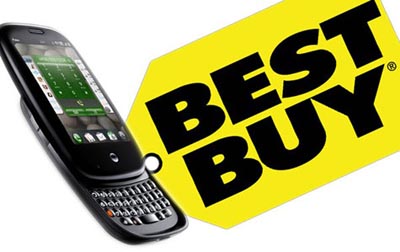 One of the biggest stories to come out of the Consumer Electronics Show this year was the Palm Pre, a smartphone that breathes new life into the Palm brand with an innovative design and an all-new operating system. We already know that Sprint is the chosen partner at this time for Palm and that’s where we’ll be able to get in on the Pre smartphone.

But what if you don’t want to buy it directly from Sprint? What other retailers will be selling the touchscreen and QWERTY-equipped handset? WebOSArena has a “credible source” stating that Best Buy Mobile will be the exclusive retailer for the Palm Pre when it is launched later this year. This means that you won’t be able to buy the handset anywhere other than Sprint and Best Buy.

In many ways, this is similar to the approach that Apple took when it first launched the iPhone. At the time, you could only buy the iPhone from Apple and AT&T stores, though that is now expanding into the realm of Best Buy and Wal-Mart. Palm doesn’t really have much of a brick-and-mortar presence, so they had to opt for another retailer.

This may be great news for Best Buy, which enjoyed significant increased sales during the exclusive launch of the Samsung Instinct at Best Buy Mobile, but this is not good news for Sprint’s partner stores. They’ll have to wait about 60 days before Sprint will start seind the Palm Pre their way. This is just rumor at this point, but it’s not that far-fetched to believe.