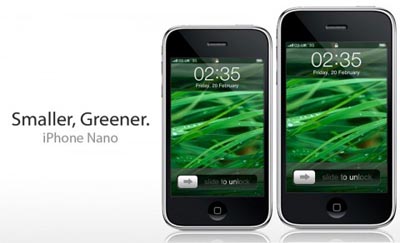 And let the rumors continue. The physical size and the higher price of the existing iPhone may be turnoffs for some people, so Apple could indeed be working on the release of an iPhone Nano after all.

These are not new rumors, of course, as stories surrounding the rumored iPhone nano have been floating around on the Internet for a while, but today’s story has a little more substance to it.

A couple of chip makers in Taiwan — Taiwan Semiconductor Manufacturing Company (TSMC) and United Microelectronics Corporation (UMC) — have reportedly accepted chip orders from Apple that lean toward the release of an iPhone nano. They will confirm the orders in March and then the iPhone nano will supposedly launch in June.

This timeline follows in the precedent set by the first two iPhones, both of which launched in June about one year apart from one another. This June will represent the second anniversary of the first iPhone, so it makes sense that Apple would have something new in that department for us.