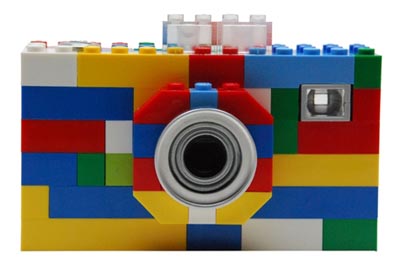 Growing up, I think I spent a little too much time fiddling with my LEGO blocks. I never really got those special sets where you had to follow the instructions to create what appeared on the box. Instead, I just got a bucket of random blocks to amuse my imagination, in addition the bucket I got via my brother (hand-me-down).

The problem with many of the LEGO sets of my childhood was that they weren’t all that functional. It was a relatively static scene, perhaps only getting movement through a couple of levers and wheels. LEGO is expanding its brand a little further now with the introduction of a functioning digital camera fashioned after the LEGO style.

That’s the digital camera that you see here. It’s remarkably colorful and targeted at children, but the kicker is that it actually works. The bricks don’t come apart, fortunately or unfortunately, but the camera will be able to take pictures.

In addition to the camera, LEGO also plans on releasing other branded electronics some time this summer, including MP3 players, walkie talkies, and other random gizmos. Prices will range from $20 to $60.