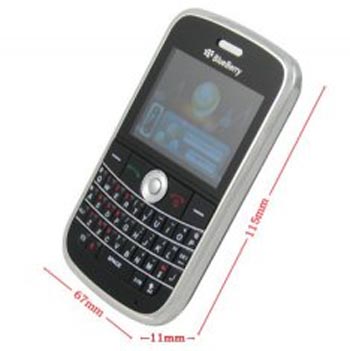 If you want to get in on the BlackBerry Bold but don’t want to pay that kind of asking price, it seems that you don’t need to look any further than the knockoff factories of China. Shown here is not the BlackBerry Bold, but rather a Bold clone at a more affordable price.

Being sold as the BlueBerry L900i (no joke), this seemingly innocent mobile smartphone takes on much the same appearance as its real Research in Motion counterpart. You still get a real leather backing (at least we think it’s real), a full QWERTY keyboard, and an overall styling that looks eerily familiar. I could be wrong, but I think the trackball has been replaced by a simple five-way joystick instead.

This quad-band GSM cell phone does not appear to do the 3G thing, as appears to be the norm for many phones coming out of China. Furthermore, there is no mention of Wi-Fi or the signature BlackBerry operating system. At least you still get a digital camera and Bluetooth connectivity. Given the traditions of Chinese knockoffs, it’s probably got an MP4 player in there too.

Whereas the BlackBerry Bold is still selling for about $600 unlocked and out of contract, the BlueBerry L900i will only run you $164.99. I don’t know. Up here, I can get a Bold on contract with Rogers for about $100. That sounds like a better deal.