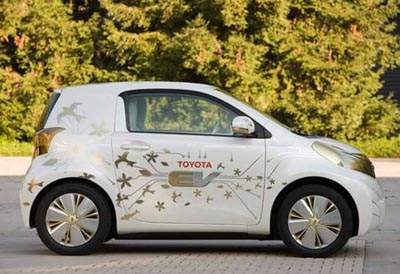 You don’t always need to drive around in a big honking SUV, especially if you only need to make the commute between your home and your office in the city. It’s probably not enough to replace the family station wagon urban crossover vehicle just yet, but the new Toyota FT-EV concept car could help stretch that budget while being a little friendlier to the environment.

Assuming that the electricity in your area is being generated from a reasonably green technology, the FT-EV electric car could be one of the greenest ways for you to get around town, short of using your own two feet to walk. This is a fully electric commuter car and it is currently on display at the Detroit Auto Show 2009.

This tiny hatchback is still in the concept stage for the time being, but Toyota is targeting an American launch of the all-electric commuter car by the year 2012. The Toyota FT-EV is being touted as a BEV or “battery electric vehicle.” Sharing its platform with the iQ urban commuter vehicle (which is even smaller than the Toyota Yaris), the FT-EV runs purely on electricity.

Don’t let the lightweight body and diminutive stature deceive you, however, as the FT-EV has enough room for four passengers and is fast enough to keep up with city traffic. I’m not so sure about on the highway, but you’ll probably appreciate the exceptional mileage and the smaller dent on your wallet. I wouldn’t expect a range of more than 50 miles or so, but that’s enough for most people to go to and from work.