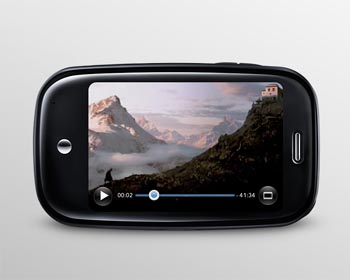 The rumors have come to pass. After all sorts of hearsay and rumor-mongering, Palm announced an all-new smartphone at the Consumer Electronics Show in Las Vegas. Not only is the form factor and design supposed to be pretty cutting-edge and innovative, but this phone also comes with a brand new operating system that will breathe lots of new energy into the struggling brand. Forget about the Centro and the Treo. This year is all about the Palm Pre smartphone and for good reason.

In case you haven’t spotted any of the news and announcements surrounding the Palm Pre (weird name, I know), you can find the official stuff on the Palm website.

We had a good feeling that Palm was going to announce a new operating system at CES, but we all knew it as the Palm Nova. That became only a half truth, because while Palm did announce a new OS, it’s actually called the Palm webOS. This doesn’t mean that it is completely stored up in the cloud, but it does mean that the phone is very Internet-focused, just like the Apple iPhone and the T-Mobile G1 Android Phone.

Among some of the highlights on the Palm Pre Smartphone are its relatively unique slide-down full QWERTY keyboard, 3.1-inch HVGA touchscreen display, high-speed EVDO Rev.A wireless data, a 3 megapixel camera, built-in GPS, 8GB of internal memory, 3.5mm headphone jack, 802.11b/g Wi-Fi, Bluetooth 2.1+EDR with A2DP, and, of course, that new Palm webOS. This final point is real superstar here, bringing a G1-like experience to the Palm smartphone. C’mon. That taskbar at the bottom is a little too familiar, isn’t it?

A Rose By Any Other Name?

Set to be sold through Sprint in the United States (though a GSM-friendly model will likely be in the cards some time in the future), the Palm Pre Smartphone has to have one of the strangest names we seen in a while. Some companies like using letters and numbers, like the G1, Xperia X1, and N97. Others prefer memorable names like the Fuze, Omnia, and iPhone. Palm seems to be going after this latter strategy, but the naming choice just comes off as odd.

Instead of being an easily brandable and recognizable name, the Palm Pre Smartphone sounds too much like a description. It’s the Pre Smartphone… like it’s the thing that comes before a smartphone. Or, it’s the smartphone that is designed for pre-teens as they prepare to enter adulthood.

Yes, a rose by any other name may smell just as sweet, but without an appropriate name that packs a good punch, the Palm Pre is already giving itself a handicap off the blocks. Palm should rethink the model name for sure.

It’s not like Palm is new to the smartphone world, but with the introduction of the new Palm webOS, they are able to offer a wealth of productivity and multimedia entertainment possibilities. The Palm Pre Smartphone has a great notifications bar that lets you know about things like upcoming appointments, there are web-connected applications that work faster than ever, and it’s got Palm Synergy to “bring your Outlook, Google, and Facebook calendars together for one logical view of your day.” This kind of integration opens a lot of doors (and windows).

Why Didn’t Other Companies Already Do This?

with the exception of some QWERTY dumbphones available through a handful of CDMA providers, no company (to my knowledge) has decided to take on the same kind of form factor as the Palm Pre. Even with the aforementioned QWERTY dumbphones, you usually didn’t get a touchscreen either.

Having a slide-out QWERTY keyboard isn’t new in the smartphone world, but all of them have had the keyboard slide out the side, forcing you to turn your phone sideways and wait for the display to orient itself into landscape mode. Eliminating this by taking the slide-down design for the QWERTY keyboard, the Palm Pre could be more user friendly, especially for QWERTY fanatics like those dedicated to the Nokia E71 or BlackBerry-type devices.

How Much Will It Cost?

With a launch targeted with Sprint later this year, everyone wants to know how much the Palm Pre Smartphone will cost. This is still up in the air, but Palm representatives are saying that it will not be at the sub-$200 range like the iPhone (with contract). They say this is because it’s not being marketed as a “cheap” device and it brings a heck of a lot to the table.

How much more than $200 (with contract) remains up in the air, but if Palm wants the Pre to succeed, they’d better keep that number as low as possible.