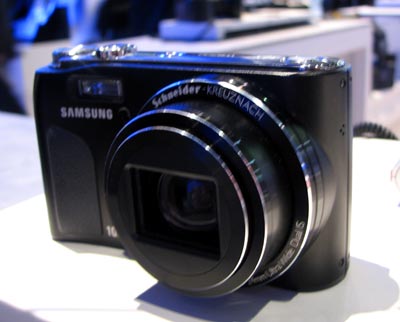 It’s not like point-and-shoots are completely lacking in the optical zoom department. I have an older Canon S3 IS that does 12x optical zoom, but the barrel makes the camera quite a bit chunkier than the more pocket-friendly versions. The Samsung HZ10W, while definitely larger than a Casio Exilim, is still very pocket friendly.

When shut off, the lens retracts mostly into the body, so you don’t have to deal with all that much thickness. Other highlights include the 10.2 megapixel sensor, 2.7-inch LCD, 24mm wide angle lens, optical image stabilization, and face detection. It also has some manual controls for you to tweak the shutter speed and aperture size.

As if that wasn’t enough, this slightly elevated point and shoot can also shoot 720p high-definition video at 30 frames per second. Not bad at all! The Samsung rep said that the HZ10W will be ready to hit the market in the next few months for about $200 to $300.