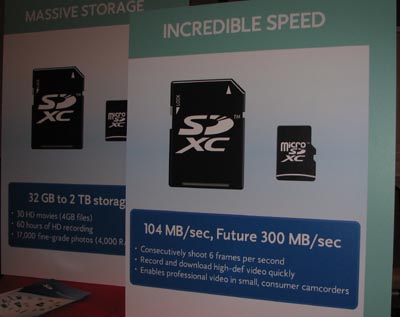 On the surface, these things will look identical to the Secure Digital (SD) memory cards that we have been using for ages, but they’re going to pack a lot more of a capacity wallop in the same sized package. We’ve already become familiar with the SDHC format that pushed SD cards well past the original 2GB maximum. I’m using a 4GB and an 8GB memory card for my digital camera, for example.

Get ready for the next generation. The new SDXC (eXtended Capacity) memory card standard has been announced, providing a theoretical maximum storage capacity of two terabytes on a single card. This applies not only to the full-size SDXC card, but also the microSDXC format as well.

Considering that the hard drive market is still trying to reach the two terabyte milestone (I hear that could be coming next week), it’s really amazing that you may soon get the same capacity on something the size of a postage stamp. The first SDXC cards will hopefully be reaching the market as soon as next year, starting out with data speeds in the 104MB/sec range. In the future, they’ll push it to 300MB/sec.

Also, while the theoretical maximum capacity is 2TB (enough room for dozens of high-definition movies), the first SDXC cards will likely only be offered in 32GB and 64GB capacities. That’s still a noted improvement over the current maximum SDHC capacity of 16GB.

I just hope that memory will get even cheaper when these cards come out, because I don’t really feel like spending more money on memory than I did on my camera.