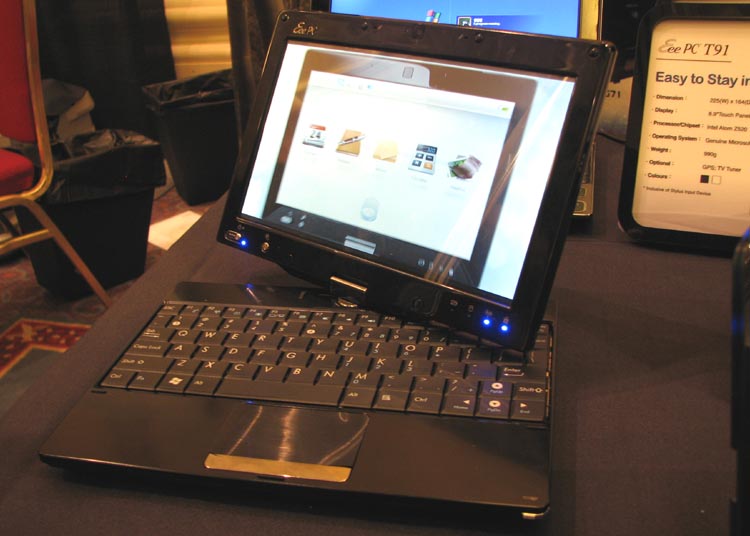 Aha! Just as I predicted, the world will soon be treated to a larger variety of netbook-sized convertible tablet PCs. We’ve seen the more expensive versions from Flybook and Gigabyte, but something closer to netbook in stature (and price) could soon be on the way.

Once again leading the charge for netbooks is Asus, the company that has just announced its new Eee PC T91 touch netbook. The outward appearance is similar to other Eee PCs already on the market, but the display can rotate and pivot to your liking. Oh, and it’s a touchscreen. That’s kind of important.

Among the notable specs on this new hotness are its 2.89-inch LED backlit touch panel, Intel Atom Z520 processor, Microsoft Windows XP Home as its operating system, and options to include GPS and a TV tuner. The whole thing tips the scales at a paltry two pounds and it measures a mere one inch in thickness.

Seeing how well the Eee PC line has performed for Asus already, I would not at all be surprised to see the Asus T91 fly off the shelves too. They’re really expanding this Eee branding beyond “regular” netbooks, adding premium netbooks, convertible tablet netbooks, and all-in-one desktops to the mix.