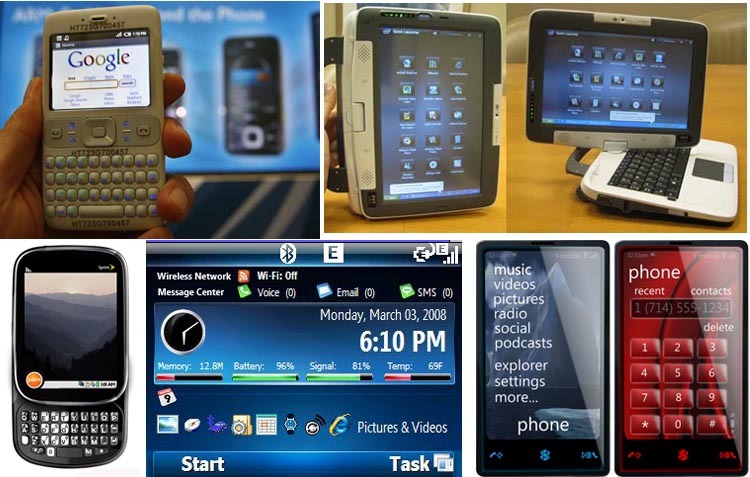 I’m currently in Las Vegas for the Consumer Electronics Show and while the giant technology conference doesn’t officially open its doors until tomorrow, there have already been a couple of press preview events and so on. I won’t know for sure what to expect from the trade show floor until I have an opportunity to read a few press releases and roam the different booths, but there are quite a few possibilities out there to consider.

Listed below are five products or innovations that I either hope to see at CES 2009 or I expect to find at CES 2009. All of these come with varying levels of likeliness, but I think you’d agree that they all fall within the realm of possibility.

After the Apple iPhone 3G launched in June of last year, perhaps one of the most exciting phones to hit the marketplace was the T-Mobile G1. It’s not because the phone itself is particularly revolutionary or innovative; it’s that it ushered in the era of Google Android. I’m still torn as to whether Android will be much of a success overall, but I fully expect CES to have a few new Android phones for me to consider.

More specifically, there are rumblings going around that Motorola just may revitalize its smartphone segment with the introduction of a Google Android phone. The exact form factor, features, and other details are totally up in the air, but this is a very real possibility, in addition to Android phones from other companies.

The netbook market absolutely exploded onto the scene in 2008, opening the floodgates to little laptops from just about every manufacturer under the sun. From MSI to Lenovo, Samsung to Acer, everyone seems to have a netbook these days, but aside from more expensive offerings from Gigabyte and a couple of other firms, there is yet to be too many convertible tablet-style netbooks.

The new Intel Classmate PC is one of the few netbooks that has a touchscreen, but I’m expecting more companies to jump on board with this too. Everyone seems to love touchscreens on smartphones and this emerging desire is sure to spill over to “cheap” tablet PCs too.

This one is almost in the bag. Palm is in serious need of an energy boost, even though the Palm Centro has managed to find some limited success with entry-level smartphone users. The Palm Treo Pro is nice and all, but when is Palm going to bring more interest back to its brand?

At CES 2009, of course! We have every reason to believe that we will find the new Palm Nova operating system unveiled at the show, in addition to a new handset to show off the OS. This phone, the rumors say, will have a large touchscreen (like all Treos), but the QWERTY keyboard will be a slide-down style.

As with every year at the Consumer Electronics Show, Microsoft will have a rather large booth area on the trade show floor. Within this space, we will find some Xbox stuff and maybe another demonstration of Microsoft Surface, as well as sections dedicated to Windows 7, the successor to Windows Vista.

That’s on the desktop and laptop side of things. Over in mobile, we may be granted a closer look at the upcoming Windows Mobile 7. There have already been a couple of notable Windows Mobile 6 and 6.1 updates, but it’s about time they move to the next generation. Windows Mobile still feels dated and behind on the times, especially since manufacturers have been forced to take matters into their own hands to create HTC TouchFLO 3D, for example. Let’s see Windows Mobile 7 for real.

5. Bring On the Zune Phone!

This has been a long time coming. The Zune UI and Windows Mobile teams are merging. We’ve already heard about something about the Microsoft “Pink” project. This might be a long shot, but Microsoft may have a little surprise for us in the form of a real Zune Phone at CES.

Then again, maybe not. I can wish, though.