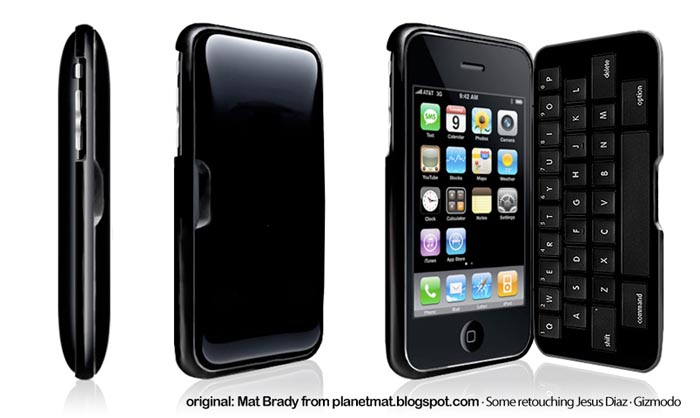 Many people, myself included, feel that Apple should create an iPhone that comes with a physical QWERTY keyboard. The touchscreen interface is fine and all, but sometimes ripping out those emails with a real keyboard is just a little more satisfying. That’s why enthusiasts have come up with mockups called the iPhone Pro and iPhone Elite.

Jesus Diaz of Gizmodo came up with the rendering shown here and what it is meant to demonstrate is the possibility of a modular iPhone. The original design can remain largely intact, but additional features (like a QWERTY keyboard) can be added with extra accessories. In this example, you get a clamshell style iPhone with a keyboard, removing it when you don’t desire the extra bulk.

Following this line of thought, it wouldn’t be hard for Apple (or a third-party accessory maker) to produce a series of these modular additions, possibly including a gaming pad, a secondary touchpad, a better camera, or any number of other things. This clamshell QWERTY case for the iPhone just might work, but I think it brings up some issues for answering voice calls, doesn’t it?