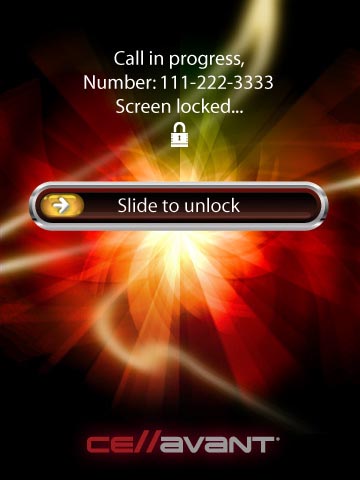 The first generation of any kind of product usually has its fair share of shortcomings. With the Apple iPhone, we witnessed a lack of copy-and-paste, for example. With the BlackBerry Storm, for whatever reason, the screen does not automatically lock when you are in a voice call. Thankfully, there is an app that rectifies this situation.

The solution does not come directly from Research in Motion, unfortunately. Instead, a third-party developer called CellAvant has come up with a free application for the BlackBerry Storm called TalkLock. Its functionality is remarkably straightforward, doing exactly what you’d expect it to do. When you start a voice call, the screen automatically locks up so that you don’t accidentally hit any of the virtual buttons.

To unlock the screen during a phone call, you perform an iPhone-like “slide to unlock” as you can see in the provided screenshot. This helps to prevent any accidental unlocks and any subsequent accidental hangups, conference calls, and speakerphone activations.

Kudos, CellAvant! You can find out more about TalkLock and find out how to download the application to your BlackBerry Storm through the official webpage.