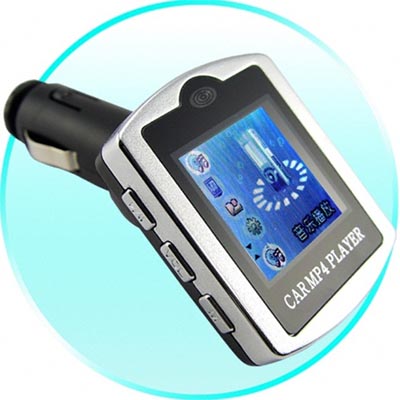 I’ve seen my fair share of FM transmitters. They usually do exactly as advertised, giving you a way to pump those MP3 player-fueled tunes through your car’s stereo system. Maybe you don’t want to deal with so many components.

Hopping over to Chinavision, you will discover an all-in-one device that is not only an MP3 player, but it also has a built-in FM transmitter. To take advantage of this dual functionality, the player also has that standard DC plug that goes into your car’s 12V (cigarette lighter) jack. Not the prettiest of contraptions, but at least it’s functional.

The “Plug-in Car MP4 Player” features a 1.5-inch display so that you can navigate through the menus and, if you prefer, you can also squint your eyes a bit to watch some videos on that thing as well. The player has 4Gb of internal memory, which can then be further expanded via the SD card slot.

The user interface looks like the standard “made in China for a no-name knockoff brand” fare, so I wouldn’t expect much in terms of sound quality, usability, or reliability. I guess that would explain why it goes for the bargain basement price of $29.88.