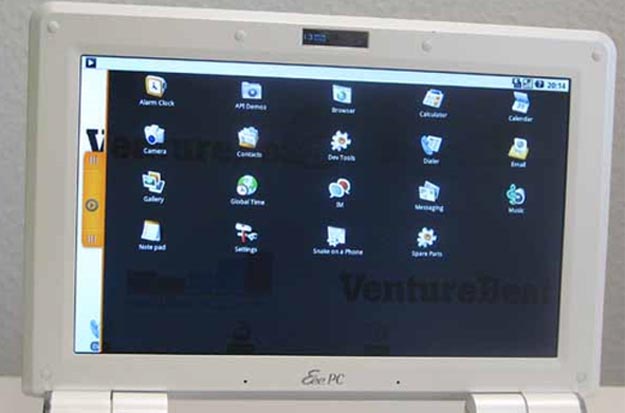 This almost feels a little backward, but it could open up the doors for some interesting possibilities. A modder has managed to take the Google Android platform over to an Eee PC.

When Google and the rest of the Open Handset Alliance got together to produce the Android platform, they had mentioned that it may expand beyond the mobile smartphone. In this way, it is very much possible that with the porting of Android into the netbook market, the functionality could be further expanded and exploited for that form factor.

According to the modders at VentureBeat, the porting process was remarkably easy, thanks largely to the open source nature of Google Android. They were able to get the sound, graphics, and Wi-Fi to all work quite easily. Better still, the visuals could take advantage of the Eee PC’s native resolution.

Going even further, there is talk that an operating system could be completely delivered online rather than being installed on a computer terminal. There would need to be a basic kernel there to latch onto the Internet, but from there, a full-fledged OS could be accessed via Google Chrome. Forget about simple online applications like Google Documents. How about a Google OS for your netbook?