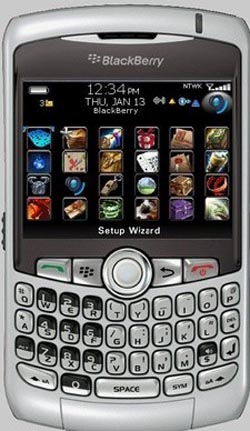 Just when I thought I was out, they pull me back in! World of Warcraft has received its fair share of celebrity endorsement and now it’s infiltrating the corporate environment as well. That’s right. World of Warcraft isn’t just for pimple-faced teenagers living in their parents’ basements. It’s for Wall Street execs too.

In furthering their obsession with the popular MMORPG, BlackBerry devices now have the opportunity to nab a special World of warcraft theme. Available for the BlackBerry Curve, the world of Warcraft Today theme doesn’t really add anything in terms of functionality or in terms of remote access for your WoW account, but at least it reaffirms your dedication to the Wrath of the Lich King.

All of the icons on the main menu have been replaced with icons that are more suitable to a World of Warcraft kind of environment. If you’re going to get a theme like this, you might as well load up with World of Warcraft wallpapers and ringtones too.

You can download the World of Warcraft Today theme at townisp.com. That’s a direct link to the Zip file.