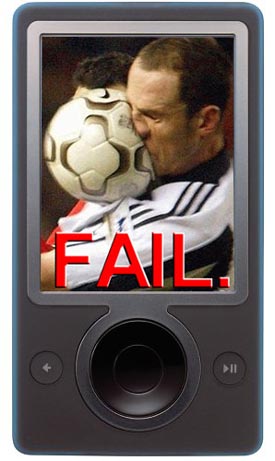 Uh oh! If you were one of the first people to grab a first-generation Microsoft Zune 30GB, you may soon be in for a pretty nasty surprise. It seems that Zune 30GB owners all across the globe are waking up to Zunes that no longer turn back on. They don’t boot up and it’s for no real reason in particular.

Apparently, this is no isolated case with one or two people who accidentally dunked their Microsoft media players in the toilet either, as the failure is happening en masse on every corner of the globe. From what they can figure, there appears to be an issue with the 30GB hard drive inside the Zune.

The hard drive, for whatever reason, is malfunctioning. As a result, the Zune is unable to boot up and the music enthusiasts are unable to access their tunes. The issue does not appear to be affecting the newer Flash Zunes or the newer 80GB Zunes, so it could have to do with the older hard drives.

The Zune forums around the Internet are dubbing the phenomenon “Z2K”, though it may be more appropriate to call it “Z2K8” or “Z2K9” given the year that we are in (and will soon be in). Make sure you keep some extra canned food and bottled water around, just in case.